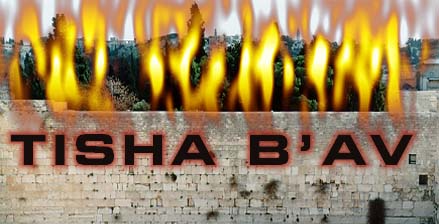 based on a lecture by Rabbi Yochanan Zweig

Written for Tisha B'Av 5755
This publication is also available in the following formats:

Explanation of these symbols
Ohr Somayach also has other Divrei Torah on The Three Weeks & Tisha B'Av available on the web.

The Talmud relates the following incident:

Because of Kamtzah and Bar Kamtzah Jerusalem was destroyed. A certain person had a friend named Kamtzah and an enemy named Bar Kamtzah. This person made a party, and told his servant to invite Kamtzah. Instead, the servant went ahead and invited the host's enemy, Bar Kamtzah. When the host saw Bar Kamtzah sitting at his party, he said, "What are you doing here? Get up! Get out!"

"Since I came, let me stay and I'll pay for my meal," said Bar Kamtzah.

"I'll pay for half of the entire affair," said Bar Kamtzah.

"I'll pay for the entire affair!"

"No!" said the host. He then grabbed him, stood him up and threw him out.

Bar Kamtzah, enraged that several Sages were present but did not protest, went to Rome and deceived the Caesar into believing that the Jews were plotting rebellion. Convinced, the Caesar came and destroyed Jerusalem.

Now, one might ask, why didn't the host take advantage of Bar Kamtzah's offer to pay for the entire meal? What better way to exploit your enemy than throw a lavish feast and have him foot the bill!

Furthermore, what is meant by the introductory statement: "Because of Kamtzah and Bar Kamtzah Jerusalem was destroyed"? Why blame Kamtzah? Kamtzah was supposed to have been invited to the party, but he never got the invitation. His only "sin" was that he just happened to have the same name as the host's enemy. Is this any reason that his name has been associated for nearly two millennia with this cataclysmic tragedy - the destruction of the Beis HaMikdash?

To answer these questions, we need to understand what is meant by the term "Sinas Chinom." Our Sages tell us that it is Sinas Chinom that destroyed Jerusalem, and it is Sinas Chinom which keeps us mired in exile until this very day. Sinas Chinom is sometimes translated as "baseless hatred" - hatred for no reason. When there is love and caring among Jews, Hashem acts with us in a way that shows love and care. But when we act with anger and spite, harboring animosity, it's as though we're inviting Hashem to do the same.

But let's stop and think: What sane individual hates someone for no reason? A petty reason, an invalid reason, perhaps. Bob steps on Steve's toe, so Steve hates Bob. But hatred with absolutely no reason whatsoever? Let us therefore take a different approach to understand the concept of Sinas Chinom.

The following parable characterizes Sinas Chinom: A king told a person, "Ask for anything you desire and I'll give it to you, and to your enemy I'll give double." After thinking a while he said, "O, King, poke out one of my eyes."

Anyone doubting that such people actually exist, consider the following true account: There were two brothers whose old mother died, leaving a $100,000 inheritance entirely to the younger brother. The older brother was enraged, certain than in the last year of her life his brother had convinced their mother to cut him out of the will.

"I'm going to contest the will," he told his rabbi. "I'll see to it that my brother doesn't get a penny!"

"Did you ask lawyers how much it'll cost to contest the will?" asked the Rabbi.

How is it that a person is willing to spend thousands of dollars, in order to gain nothing? Why doesn't he go out and buy presents for his friends and family, or better yet - himself?

The answer is: Sinas Chinom. Of course he'd be better off spending the money on himself. But he cannot. Why? Sinas Chinom: "Free Hatred." Though the hatred may have some basis, it is "free" in the sense that it yields nothing. It is free of logic, free of profit. On the contrary, he will poke out his own eye or spend a fortune - even destroy himself - to satisfy his hatred. Ultimately, Sinas Chinom is self-hatred.

"A certain person had a friend named Kamtzah" - In Hebrew, the word "Kamtzan" means "miser," someone so out of touch, so self-hating, that he cannot spend money even for himself. "The host had a friend" - someone with whom he identified - named "Miser." The Talmud is hinting here that the host himself is a Kamtzan. What greater gain than to throw a party and have someone else foot the bill? But the host was focused not on his own gain, but rather, on his enemy's - and ultimately his own - destruction.

"Bar Kamtzah" means "outside the realm of miserliness"

The guest at the party, Bar Kamtzah, on the other hand, loved himself. Look how much money he was willing to spend to spare himself the embarrassment of unceremonious eviction! His very name - Bar Kamtzah - hints at this: "Bar" means "outside." "Kamtzah," as mentioned before, refers to self destructive miserliness. Hence, "Bar Kamtzah" refers to someone who is "outside the realm of miserliness." From the story's tragic end, however, we see what an infectious disease is Sinas Chinom. After being the target of the host's vicious Sinas Chinom, even Bar Kamtzah - the symbol of love and generousity - succumbs. His hatred foments into a storm, until in a fit of malice he slanders the entire Jewish nation in the ears of the Roman Emperor, bringing destruction upon his family, his homeland, and ultimately - himself.