Your dormitory policy is very sensible. It's obviously intended to ensure that the first degree you get will be a piece of paper, not a burn. Breaking this rule endangers you and others, besides the fact that it is simply against the rules.

I recommend that you light your menorah at the entrance to the dorm building, or if that's not possible then in the dining room. 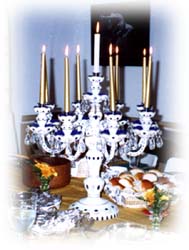 Where can I, a complete novice, find the rabbinic or halachic rulings on the construction of a chanukia (chanuka menorah)? I've enclosed a photo of a chanukia that I had custom-built for my wife and I can't find anyone to give me a straight answer.

I've been told that there are rules and regulations in the Talmud, Shabbat 23b, but I don't have a Talmud near me, and the closest shuls are more than 20 miles from here, so that's out.

What are the requirements? Where can a layman find them? How do the above opinions get resolved? Where do I go? HELP!! Please help with a good explanation, not just a one word sentence that doesn't tell me why.

Traditionally and ideally, the chanukia is a straight line. The one pictured which you made is also OK, because each candle is distinct from the others.

The idea is, that the onlooker can see which night of Chanuka it is by looking at the candles, which is easiest if in a straight line. For the same reason, the shamash must be distinct, preferably a little higher than the other candles.

The flame must not be higher than 20 amos (approximately 30-40 feet) above ground level of the public thoroughfare. If the flame is higher, the person has not fulfilled the mitzvah. Large public menorahs are anyway not intended to fulfill the mitzvah because they are not in or next to any individual's dwelling. The mitzvah is to light the menorah at home.

How soon after the Maccabean victory was Chanuka celebrated on an annual basis? When were the first chanukiot created and used? When was the ban on constructing a seven-branched menorah rescinded?

I have to do a project for my Torah teacher on the menorah, could you send me some pictures, and information on the menorah. Thank you for your time. Sincerely, Feldi3

Can you give me information on the significance of the 7-branched menorah, as opposed to the 9-branched chanukia?

The original Menorah was the golden candelabra that G-d commanded the Jewish People to make and place in the Holy Temple. It had six branches and a stem, making seven lamps in all. The kohanim (priests) lit it once a day. The Torah relates its measurements and design in Exodus 25:31-40.

The Sages teach that the Menorah was the vessel that G-d used to blend the spiritual light of the World to Come with the physical light of this world. For this reason, the windows in the Temple were narrow on the inside and wide on the outside - to spread out this blended light to the world.

Chanuka was instituted as an annual holiday the very first year after the Maccabean victory (165 BCE) to celebrate the victory and the miracle of the oil that burned for eight days.

The Chanuka menorah has place for eight candles and for a ninth candle set off somewhat from the rest. The eight candles commemorate the miracle of the oil while the ninth candle, the shamash, is for light. The first use of an eight-armed menorah for Chanuka is not known, although there are some dating back over 500 years.

There's no absolute requirement to use a Chanuka menorah, because you can fulfill the minimal requirement with one candle per night. But since it's ideal to add a candle each night, the custom arose to use an eight-branched menorah. A friend of mine from Yeshiva used to line up eight soda cans as his menorah!

And Feldi, let me know what grade I get, er, I mean, what grade you get, on the report!

Do you know if reindeer sausage is kosher? It is made locally at Indian Valley Meats. Thank you.

Reindeer is a kosher-type animal. But, like all kosher-type animals, it isn't actually kosher until it is ritually slaughtered and goes through a special process. If it doesn't go through this process, then it's not kosher. That's why all meat needs Rabbinic supervision.

If it's difficult in Anchorage to find meat that is actually kosher, I am including an address of a Rabbi in Anchorage who will be able to help you obtain kosher food (address omitted from published version).

Why was the Davidic line not restored to the throne after the Maccabean revolt overthrew the Syrian-Greek occupation? Why did the people accept the Hasmonean line instead?

The Hasmoneans were the military commanders of the coup; they kept the throne for themselves being the family in power who had the capability of maintaining law and order. In fact they were punished for not returning the throne to the house of David, and eventually not only lost the throne but the whole family died out. The people themselves had little to say about the matter, as the monarchy could not have been retrieved by force (i.e., a civil war) out of gratitude to the Hasmoneans.

Last week we asked: This riddle is attributed to the Ibn Ezra. Two characters in Tanach: one's name makes him sound as though he's his own uncle, and the other's would have him appear to be his own grandfather. Who are they?

As a Chanuka present to our readers, we're offering you another riddle this week, including the answer!

Here is a Yiddle Riddle which I heard from a prominent cheder rebbi in Yerushalayim: Name four people in Sefer Bereishis (Genesis) whose names consist of two words.

What about Adam HaRishon? (Just kidding.) But on a more serious note: Ben Oni! That was Rachel's name for her son Binyamin. (Bereishet 25:18) And what about Malki Tzedek, king of Shalem? (Bereishet 14:18)

This isn't a question but it's a true story that I heard that I'd like to share. My friend received a 500 Rand inheritance and decided to give 50 Rand to charity. His parents said they thought that was too much but he told them that whatever you give to charity, Hashem gives back to you. So he gave it to charity and later, when cleaning his drawers and going through cards from his past birthdays, he found a 50 Rand note that he had not seen.

Re: Sanctifying the Moon Versus Moon-Worship (Ask the Rabbi #212):

Many people are careful to face away from the moon while saying Kiddush Levana. The reason is to avoid giving the appearance of moon worship.

In a recent Ask the Rabbi regarding the letters "beit, samech, dalet," you wrote: "It's a custom to write it on top of the page as a prayer for success in what we are about to write, but it's not an absolute requirement. I've never noticed anyone writing it when they write a check."

An interesting thing just happened to me before I read the above. A gentleman from Spain came into my Judaica store and wrote "beis samech dalet" above his signature on the credit card slip. He said that he has officially incorporated it as a legal part of his signature and showed me that it appears above his name on his driver's license and on other documents.

I'd like to note that Rabbi Yitzchak Karo in his sefer "Toldot Yitzchak" (Vayikra 14:34) says that the reason to write either "beit hey" or "samech dalet" is from the verse in Mishle (3:6) "In all your ways know Him..." However, if writing "beit hey"one should be careful not to put the paper in the garbage (see Igrot Moshe Yoreh Deah 2:138).

Also what you wrote about using the names of people from before Avraham, see Pitchei Teshuva Yoreh Deah 365:6 in the name of Teshuva Me'ahava (1:35) that one may do so, and not like the Mabit (1:276). Thanks for your wonderful weekly newsletter.

© 1998 Ohr Somayach International - All rights reserved. This publication may be distributed to another person intact without prior permission. We also encourage you to include this material in other publications, such as synagogue newsletters. However, we ask that you contact us beforehand for permission, and then send us a sample issue.

This publication is available via E-Mail

is an international network of Yeshivot and outreach centers, with branches in North America, Europe, South Africa and South America. The Central Campus in Jerusalem provides a full range of educational services for over 685 full-time students.

The Jewish Learning Exchange (JLE) of Ohr Somayach offers summer and winter programs in Israel that attract hundreds of university students from around the world for 3 to 8 weeks of study and touring.

The Ohr Somayach Home Page is hosted by TeamGenesis