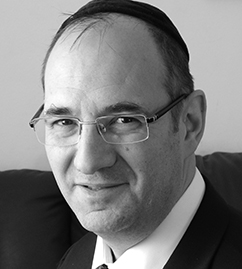 There's been a lot of buzz lately about your new sefer about Rav Weinbach's teachings — “As Heard From Rav Weinbach”. First of all, what is the content of the sefer?

The sefer is based on Rav Weinbach’s Ohr Lagolah shiurim. It has five sections. The first discusses public speaking, the rabbi’s role as counselor, building a Torah society, the written word and kiruv, and is rewritten from transcriptions of his classes. The main body of the book is a collection of his source sheets and points to consider when preparing a shiur. This section has material for fifty shiurim, and there is an accompanying CD of mp3 recordings of more than 40 shiurim. Sections three and four contain many of Rav Weinbach’s writings on contemporary affairs and the Jewish year, and the final section is composed of the Rosh Yeshiva’s recommended reading selections on the parsha. Other alumni may well remember these from the sheets he used to place on the bima in the Beit Hamidrash every Thursday night.

Ohr Lagolah is Ohr Somayach’s two-year rabbinic, kiruv and teacher training program with hands-on experience and the option for integrated semicha preparation; the world’s longest running program of its kind. Hundreds of Ohr Lagolah alumni have found rewarding, meaningful and high-impact positions in klei kodesh across the world. We start a new cycle each year in Elul and anyone interested in finding out more can contact me on lagolah@ohr.edu .

Returning to the sefer: Why you? Why now?

Good questions, but really it was just a matter of having the right idea, in the right place, at the right time.

Rav Weinbach, whose yahrzeit is Kislev 27 on Chanuka, was known as a great writer and orator as well as a Rosh Yeshiva who founded great Torah institutions for ba'alei teshuva and people from nearly any background. But if he didn't write this sefer with his own pen, perhaps this means he would rather it remain as part of the "Oral Law"?

Absolutely not. When I mentioned this idea to Rav Weinbach (in what would turn out to be his last few weeks in yeshiva) he was tremendously excited about the project, and immediately turned his hand to helping organize, title and order his handouts to make them easier to work with. He was positively invigorated with the idea and opportunity to be able to continue to make an impact on Klal Yisrael. I feel tremendously privileged and honored that he entrusted me to take my idea from concept to fruition. I’m also very grateful for the warm support I received for this project from our Rosh Yeshiva, Rav Nota Schiller, shlita.

Is the sefer for everyone or only for a specific audience?

It is aimed predominantly for Rabbis and educators who are looking to broaden their repertoire of material. However it is full of great insights and chiddushei Torah and any ben Torah should gain a great deal from it. And it would make a great Chanuka gift as well!

How has the sefer been received?

B”H the response has been fantastic. Rabbanim across the world are using it and have sent great feedback. I’ve heard from Rabbis in Australia, South Africa, the U.S., Canada, the U.K. and of course in Israel, all with very positive comments. The book is selling well and Iy”H when it sells out will have generated the money to reprint the sefer.

Most importantly: how can one obtain a copy?

It’s available in all good Jewish bookstores, from the Ohr Somayach Main Office in Jerusalem and online from Menucha Publishers in the States and from Lehmanns in the U.K or at http://ohr.edu/web/weinbach-resource-guide.htm .