An explanation of the laws and customs of a Jewish Wedding.

In traditional Jewish literature marriage is actually called kiddushin, which translates as "sanctification" or "dedication." "Sanctification," indicates that what is happening is not just a social arrangement or contractual agreement, but a spiritual bonding and the fulfillment of a mitzvah, a Divine precept. "Dedication," indicates that the couple now have an exclusive relationship, that involves total dedication of the bride and groom to each other, to the extent of them becoming, as the Kabbalists state, "one soul in two bodies."

The very first stage of a traditional Jewish marriage, is the shidduch, or matchmaking. This means that the process of finding a partner is not haphazard or based on purely external aspects. Rather, a close friend or relative of the young man or woman, who knows someone that they feel may be a compatible partner, suggests that they meet. The purpose of the meeting is for the prospective bride and groom to determine if they are indeed compatible. The meetings usually focus on discussion of issues important to marriage as well as casual conversation. The Talmud states that the couple must also be physically attractive to each other, something that can only be determined by meeting. According to Jewish law physical contact is not allowed between a man and a woman until they are married (except for certain close relatives), and also they may not be alone together in a closed room or secluded area. This helps to ensure that one's choice of partner will be based on the intellect and emotion as opposed to physical desire alone.

When the families have met, and the young couple have decided to marry, the families usually announce the occasion with a small reception, known as a vort. Some families sign a contract, the tenaim, meaning "conditions," that delineates the obligations of each side regarding the wedding and a final date for the wedding. Others do this at the wedding reception an hour or so before the marriage. One week before the wedding the bride and groom, the chosson and kallah, stop seeing each other, in order to enhance the joy of their wedding through their separation.

At the reception itself, the first thing usually done is the completion, signing and witnessing of the ketuvah, or marriage contract. This contract is ordained by Mishnaic law (circa 170 CE) and according to some authorities dates back to Biblical times. The ketuvah, written in Aramaic, details the husband's obligations to his wife: food, clothing, dwelling and pleasure. It also creates a lien on all his property to pay her a sum of money and support should he divorce her, or predecease her. The document is signed by the groom and witnessed by two people, and has the standing of a legally binding agreement, that in many countries is enforceable by secular law. The ketuvah is often written as an illuminated manuscript, and becomes a work of art in itself, and many couples frame it and display it in their home.

After the signing of the ketuvah, which is usually accompanied by some light snacks and some hard liquor for the traditional lechaims (the Jewish salute when drinking, which means, "to life!"), the groom does the bedekin, or "veiling." The groom, together with his father and future father-in-law, is accompanied by musicians and the male guests to the room where the bride is receiving her guests. She sits, like a queen, on a throne-like chair surrounded by her family and friends. The groom, who has not seen her for a week (an eternity for a young couple!), covers her face with her veil. This ceremony is mainly for the legal purpose of the groom identifying the bride before the wedding. 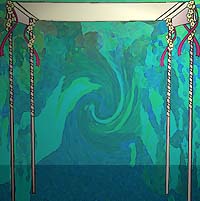 The next stage is known as the chuppah, or "canopy." The chuppah is a decorated piece of cloth held aloft as a symbolic home for the new couple. It is usually held outside, under the stars, as a sign of the blessing given by G-d to the patriarch Abraham, that his children shall be "as the stars of the heavens." The groom is accompanied to the chuppah by his parents, and usually wears a white robe, known as a kittel, to indicate the fact that for the bride and groom, life is starting anew with a clean white slate, since they are uniting to become a new entity, without past sins. In fact, the bride and groom usually fast on the day of the wedding (until the chuppah) since for them it is like Yom Kippur, the Day of Atonement. While the bride comes to the chuppah with her parents, a cantor sings a selection from the Song of Songs, and the groom prays that his unmarried friends find their true partners in life.

When the bride arrives at the chuppah she circles the groom seven times with her mother and future mother-in-law, while the groom continues to pray. This symbolizes the idea of the woman being a protective, surrounding light of the household, that illuminates it with understanding and love from within and protects it from harm from the outside. The number seven parallels the seven days of creation, and symbolizes the fact that the bride and groom are about to create their own "new world" together.

Under the chuppah, an honored Rabbi or family member then recites a blessing over wine, and a blessing that praises and thanks G-d for giving us laws of sanctity and morality to preserve the sanctity of family life and of the Jewish people. The bride and groom then drink from the wine. The blessings are recited over wine, since wine is symbolic of life: it begins as grape-juice, goes through fermentation, during which it is sour, but in the end turns into a superior product that brings joy, and has a wonderful taste. The full cup of wine also symbolizes the overflowing of Divine blessing, as in the verse in Psalms, "My cup runneth over."

The groom, now takes a plain gold ring and places it on the finger of the bride, and recites in the presence of two witnesses, "Behold you are sanctified (betrothed) to me with this ring, according to the Law of Moses and Israel." The ring symbolizes the concept of the groom encompassing, protecting and providing for his wife. The ketuvah is now read aloud, usually by another honoree, after which it is given to the bride. 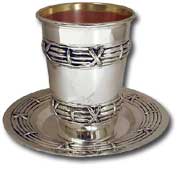 After this, the sheva brachos, or seven blessings, are recited, either by one Rabbi, or at many weddings a different blessing is given to various people the families wish to honor. The blessings are also recited over a full cup of wine. The blessings begin with praising G-d for His creation in general and creation of the human being and proceed with praise for the creation of the human as a "two part creature," woman and man. The blessings express the hope that the new couple will rejoice together forever as though they are the original couple, Adam and Eve in the Garden of Eden. The blessings also include a prayer that Jerusalem will be fully rebuilt and restored with the Temple in its midst and the Jewish people within her gates.

At this point the couple again share in drinking the cup of wine, and the groom breaks a glass by stamping on it. This custom dates back to Talmudic times, and symbolizes the idea of our keeping Jerusalem and Israel in our minds even at times of our joy. Just as the Temple in Jerusalem is destroyed, so we break a utensil to show our identification with the sorrow of Jewish exile. The verse, "If I forget thee O' Jerusalem, let my right hand forget its cunning: If I do not raise thee over my own joy, let my tongue cleave to the roof of my mouth", is sometimes recited at this point. With the breaking of the glass the band plays, and the guests usually break out into dancing and cries of "Mazaltov! Mazaltov!" (Some say, tongue in cheek, that this moment symbolizes the last time the groom gets to "put his foot down")

Now that the couple are married they are accompanied by dancing guests to the cheder yichud, "the room of privacy." They may now be alone in a closed room together, an intimacy reserved only for a married couple. In fact, according to many Jewish legal authorities, the very fact that they are alone together in a locked room, is a requirement of the legal act of marriage, and hence their entry into the room must be observed by the two witnesses of the marriage.

While the bride and groom are alone together (usually eating, after having fasted all day) the guests sit down to eat a festive meal. The meal is preceded by ritual washing of the hands, and the blessing over bread. At some point, the band announces the arrival "for the very first time, Mr. and Mrs. _____!!!" and everyone joins in dancing around the bride and groom. The dancing, in accordance with Jewish law requires a separation between men and women for reasons of modesty, and hence there is a mechitzah, or partition between the men and women. The main focus of the dancing is to entertain and enhance the joy of the newlyweds, hence large circles are formed around the "king and queen," and different guests often perform in front of the seated couple. It is not unusual to see jugglers, fire eaters, and acrobats at a wedding (most of whom are guests, not professionals!) The meal ends with the Birchas Hamazon, Grace After Meals, and again the seven blessings are recited over wine, shared afterwards by the bride and groom.