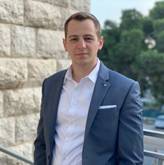 Most people have heard of Bill Gates, Steve Jobs and Mark Zuckerberg and a cohort of other young entrepreneurs who either began their businesses as teenagers in a garage or who dropped out of college to build a disruptive business empire. Had Seva Dorn not found his way to Ohr Somayach, you probably would have seen his name in a list of the youthful business greats. But, Seva wasn’t only Jewish, he felt Jewish — and as his success in business grew and he thought about his future, he realized that he cared more about his neshama than about his wallet.

Seva’s parents grew up in Minsk and Pinsk in the former Soviet Union and while their families were proud of their Jewish heritage, observance of traditions and mitzvahs was minimal. When the Soviet Union collapsed, the opportunity to rediscover their Jewish roots presented itself. Seva’s father taught himself Hebrew and found employment in a synagogue in Minsk as a Hebrew teacher and tutor. Seva’s mother heard of an opportunity to study in the Gateshead Seminary in England and sent for an application.

Fortunately for the both of them, the application had portions that were in Hebrew, and Seva’s mother could not read Hebrew. She heard about Mr. Dorn who was a Hebrew teacher at the Minsk synagogue and asked him for help in filling out the application. She was accepted and spent a valuable year at Gateshead Seminary. During that year, a correspondence between the two developed. When she returned to Minsk, they married.

At that time, in the early 1990’s, many Jews left Russia. Seva’s father’s family moved to Ashkelon and his mother’s to Cleveland. In 2000, Seva’s parents followed his mother’s family to Cleveland. Seva was five years old and spoke no English. The first school he attended was a Jewish one, but as he struggled with the language and the culture of his new home, his unhappiness affected his attitude towards that school, and his parents transferred him to public school.

The family was involved with the Chabad community in their Cleveland suburb, and when Seva got to middle school he was an active member of NCSY. After high school he came to Israel on a Birthright trip. Although he had been to Israel many times before to visit family, this trip was an eye-opener. He returned to Cleveland with a serious commitment to Judaism. Seva started college, joined a Jewish fraternity and became active in Chabad on campus.

In 2015, after his first year of college and upon the advice of his NCSY rabbi, he applied to the two-month summer JInternship Program at Ohr Somayach. He loved it.

In the meantime, SevSolutions, LLC, a Digital Marketing business that he started in high school was taking off. There weren’t enough hours in the day to both remain in school and to run the company. And since his major was Business Administration, he was convinced that actual experience in running a business was more valuable than learning how to do it.

The business grew by leaps and bounds (it now has offices in the US, England and India) and Seva was fully invested in its success. But his mother was concerned about his spiritual life. Without disclosing her motives, she planned a trip for the two of them to London and Paris, where they would visit museums and other cultural sites and have a great European vacation. Seva was delighted. What she did not tell him until later was that they were going to spend a Shabbos in Gateshead with one of her former school friends.

That Shabbos changed Seva’s life. He met Yosef Tzvi Schleider. Yosef Tzvi is a very successful businessman in his middle thirties with a large family, and to whom the Torah and his family were much more important than making money. Comparing himself to Yosef Tzvi, Seva felt that despite his own success in business, he had actually accomplished very little. He also realized that he was not growing spiritually. He had to find his purpose in life. Seva’s wise mother had accomplished her goal.

He came back to Ohr Somayach’s Mechina Program and stayed until Pesach of 2020. After going home for the holiday, he was stuck. Because of the Covid pandemic, Israel had closed its border even to returning students.

Not one to let the grass grow under his feet, Seva started learning daily with Rabbi Zalman Corlin, the head of the JLE program in the States, and with Rabbi Yaakov Lubow of our staff in Jerusalem, and also going to the shiurim of Rabbi Yisroel Brog’s Tiferes Avigdor Miller Yeshiva on the campus of Telshe Yeshiva in Wickliffe, Ohio. He also started a new business — acrylic sneeze guards — the folding plastic partitions that are so ubiquitous in the time of Corona. He marketed them to schools.

His first major contract was with the Hebrew Academy of Cleveland and a consortium of other Jewish schools in the area. Through the recommendation of an Ohr Somayach alumnus, Toby Kaye, who is also Seva’s US accountant, he met a young, Orthodox businessman who got him an appointment with a group of the top administrators of the consortium. He made his pitch and landed the contract. That got his newest business off the ground, and orders started pouring in from all over the country. In gratitude for his help in procuring the contract, Seva offered his new acquaintance a generous commission for his help. But Cleveland being Cleveland, his offer was declined and instead it was suggested that he give that same amount to tzadaka. Seva had never written such a large check to any charity. He had always plowed his profits back into his businesses. But this time he had no choice. He gave a large check to one of the local charity funds. With that act of tzadaka, he felt a bracha enveloping him, and that Shamayim was indicating to him that to be truly happy and successful in business, one had to give maaser.

As soon as the opportunity to return to Israel presented itself, Rabbi Brog advised Seva to return to Ohr Somayach. Seva realized that if he was ever going to feel fulfilled in life and prepared for marriage, he must learn Torah now — business could wait.

He returned to the Yeshiva on November 20, 2020. Being a returning student to the Mechina Program, he chose as his roommate, Moshe Males, whose father came from Cleveland. It was a good choice.

A few months later, as the two roommates were admiring the new Beis Midrash that had just been built on the Yeshiva campus, Seva suggested that they repaint their own Beis Midrash in the Lauffer building. Seva would provide the money and Moshe the labor.

As they were surveying the project, Nissim, another student in Mechina, suggested moving one of the bookcases to a different wall. When they did, they saw the mold and cracking behind the bookcase and realized that a paint job wasn’t enough. Seva asked Moshe what a complete renovation of the space would entail. Moshe answered that the ceiling tiles and ceiling lighting, bathrooms, furnishings, steps, front door and walls at the entrance of Lauffer all needed replacing or repair. Seva told Moshe to order the material and then set about raising the money. Much of it came from Seva’s own pocket, but other talmidim chipped in, some in quite a significant way. One student with a car drove across Israel to get just the right marble for the steps! Others helped to schlep the heavy materials so that Moshe could do the work. As you can see from the pictures and video, the project is nearing completion. And what a job they did! Kol hakavod to the talmidim of the Mechina program. Their extraordinary devotion and sacrifice to the yeshiva will go down in the annals of Ohr Somayach history for generations to come.