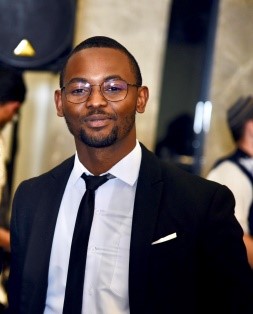 Binyamin’s story could be titled “Out of Africa.” And that would be appropriate, because shortly, on the holiday of Passover, we will be recounting our own “out of Africa” story. But his is slightly different.

Binyamin grew up in a staunchly Christian home. He’s the oldest of three children. His father, Samuel Gordon, was a very popular Pentecostal minister. The church that he founded would regularly draw over 1,000 people on a Sunday.

In 2003 and 2004 his father attended a Christian conference held in South Africa. While there, he felt a calling to move to South Africa and open a church. And he did. After establishing his church in Roodepoort, a suburb west of Johannesburg, he sent for his family. Soon he was drawing large crowds or 500-600 a week and opened a branch in Soweto, a large black township nearby, where he was also very successful. He had soon opened branches in Ghana and in a number of cities in the United States.

In 2011, Samuel had a dream, which he confided to his family. In it he was wrestling with a man who kept yelling at him, “It’s time for Israel. Think Israel.” Until that point, Israel and the Jews had not been topics of discussion in the church or in the Gordon household, but that dream changed his perspective. After a few weeks, he began to introduce the idea of supporting Israel into his sermons. Soon afterwards he organized rallies in support of Israel and began to bring groups of Africans to Israel. He also started an organization called “Africa-Israel Initiative.” The Israeli government took note of his support and sent representatives to his rallies. The South African Zionist Organization also invited his father to speak at their plenums. Binyamin, still in his teens, was the Vice President of the Youth Division of the Organization.

On one of his return flights from Israel, Binyamin’s father noticed an Orthodox Jewish man reading a Jewish book. He asked him what the book was about and where he might get a copy. The book was a popular Breslov title, “The Garden of Faith.” The man told him the name of a bookstore in Johannesburg that carried it. His father bought it, read it and returned to the store to buy many more books. He discussed what he read with his wife and with Binyamin. He was beginning to see the Truth of Judaism and started moving away from Christian ideology. Binyamin, alongside his siblings, were all drawn to this new pool of wisdom.

His father slowly started introducing changes in the church. His sermons were now primarily about the need to support Israel and the Jews as the “Priests to the nations.” This emphasis on Jews and Israel irritated many and they dropped out of the church. As his world started crumbling before him, Binyamin felt the need to get clarity as to his own beliefs. He began a serious study of the history of Christianity.

At about the same time, his father instructed Binyamin, who was the church’s music director, to substitute the name of the Christian deity for the name of in all the songs that were sung at the services. Needless to say, this created a huge rift in the church.

Changes were also afoot at home. One of his father’s Jewish friends invited the Gordon family to come to his home for Shabbat. Binyamin and his father went to shul on Friday night for the first time. It was an extremely emotional and spiritual experience for both of them. The structure of the prayers, the silent Shmoneh Esrei, the tunes and the Shabbat atmosphere were intoxicating. The delicious meal that followed with its zmirot and divrei Torah were nothing like they had ever experienced. The whole family was touched beyond words.

Soon afterwards, the Gordon family started to observe Shabbat and kashrut to the best of their understanding. That meant not leaving home on the Sabbath, having family meals and not watching TV. Their knowledge of keeping kosher came from the Written Law. Not living in a Jewish community, they weren’t aware at first of kosher butcher shops, and so, armed with a book on kosher slaughtering, Binyamin and his father went out to farms, bought animals and shechted them for food. Not being used to killing animals, that exercise was short-lived, and resulted in their eating a lot of fish.

The Gordon family was forced to live a double life — closet “Jew-ish” people for 6 days a week, and church leaders on Sunday. They lived like this for over a year, but it couldn’t last. One Sunday, his father, in the middle of his sermon, announced that he and his family had decided to convert and that he was disbanding the church. He urged those who wished to follow him to become Noahides and he converted the church into a Noahide worship center. He was still their spiritual leader; however, he and his family decided to go all the way, and they convinced the Beit Din in Johannesburg of their sincerity. After two years, which ended this past summer, the family moved to Glenhazel, a Jewish enclave in Johannesburg and converted. His father is now learning full-time in Yeshiva Gedolah Johannesburg.

With the encouragement of his Rabbis, Binyamin came to the Center Program in December of 2019. His sister is in Neve Yerushalayim and his brother is in high school. Of his experience here, Binyamin says, “I wanted a Yeshiva that would prepare me for authentic Jewish life. Ohr Somayach is absolutely amazing. It is exactly what I wanted.”