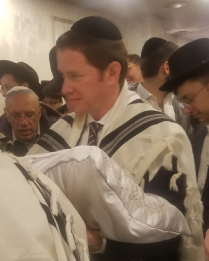 How do you become a very successful New York lawyer representing injury victims in high stakes litigation while simultaneously representing the Jewish People? If one were to take a recipe from Harry Rothenberg’s “cookbook,” it might read something like this:

And if you’re in a hurry and don’t have so many years to spend cooking the “slow” way, skip steps 1-7 and just concentrate on steps 8 to 10. One might also substitute any decent law school for Harvard in step 9.

The Rothenberg Law Firm, which is now celebrating its 50th year in existence, is one of the leading plaintiffs’ personal injury law firms. Harry’s peers have consistently awarded him the distinction of “New York Super Lawyer” since 2008 and he has won many awards of seven and eight figures in the courtroom for his catastrophically injured clients. He heads the New York office of his firm, and was recently in Jerusalem to celebrate the bris of his newest grandson. We caught up with him while he was visiting the Ohr Somayach campus to speak at one of the student programs here.

Harry was born in Philadelphia, the first of eight children to his parents who are lawyers and founders of the Rothenberg Law Firm. They are also staunch members of the Orthodox Jewish Community in that city.

He went to the local Orthodox day school where he excelled academically, but chafed at the strict rules and rote religious education.

After graduating high school at 16, he entered the University of Pennsylvania where he was one of the very few Jewish students who wore a yarmulke. The pull to conform is very strong in every teenager, and, in that respect Harry was pulled in the direction of the vast majority of his fellows on campus. Although he resisted the temptation to spurn his heritage, he hung on to it by a thread. Not one to do things by half-measures, at the end of his second year he made two decisions. One was that he would transfer to Columbia University, which had a stronger Orthodox community of students. And the second decision was to spend a year in Israel at a yeshiva and figure out if he should remain in the religious fold or not.

He was accepted to Columbia as a junior and postponed his admission for a year to learn in Jerusalem. After a few months in a yeshiva it was clear that he had chosen the wrong one. He switched to the American Program at Bar Ilan where he pursued an independent study of the flora and fauna of the Eastern Mediterranean shoreline, mainly at the beach in Tel Aviv. As one might imagine, that experience in Israel did little to strengthen his attachment to halacha.

He spent his last two years in college at Columbia, graduating in 1988. After receiving an acceptance to Harvard Law School, Harry decided to give Yiddishkeit one more chance, and this time he picked Yeshivat Ohr Somayach as the venue. He managed to convince the Harvard Acceptance Committee to let him defer admission for one year and then for another year at the end of the first.

It would be an understatement to say that Ohr Somayach “blew him away.” On his first day at the Yeshiva, Rabbi Chaim Salenger, the dorm manager, told him that he was going to tell him the rules of the dorm. Harry steeled himself for the usual long list of “don’ts.”

“Rule number one,” Rabbi Salenger intoned: “No girls in the dorms.”

“And rule number three, no chillul Shabbos b’farhesia (public desecration of Shabbat) while on campus. We don’t want to make the other students feel uncomfortable.” Rabbi Salenger stopped talking.

Expecting about fifty pages worth of rules, Harry asked: “What about the other rules?”

What about coming to davening on time? A dress code? Behavior off campus?”

“No other rules,” Rabbi Salenger responded.

“You mean that’s it. Three rules?”

“Yes. Listen; if we told you that you couldn’t do this or couldn’t do that, or you had to this or that, when you went back home, would you continue keeping the rules?”

“Precisely. What’s the point of giving you all sorts of rules if you won’t internalize them and live by them?”

And Harry was introduced to the Ohr Somayach theory of Jewish Education. It suited him perfectly.

Rabbi Bertman’s Gemara shiur was an eye-opener. It was fascinating. The Rebbe was brilliant and could answer any question thrown at him. Instead of the rote learning he experienced in day school, Gemara was now an intellectual challenge. He loved it.

The opportunity to attend shiurim and be mentored by world class lecturers and role models such as the Roshei Yeshiva Rav Nota Schiller shlita and Rav Mendel Weinbach z’tl, along with Rabbi Dr. Dovid Gottlieb and Rabbi Dr. Akiva Tatz, was the opportunity of a lifetime. Harry also met and gained immeasurably from Rabbi Mordechai Becher, with whom he now learns in Passaic, and with Rabbis Abraham Rockmill and Reuven Geffen, with whom he remains close.

But the Rebbe who really changed Harry’s life was Rav Uziel Milevsky zt’l. Rabbi Milevsky was an unparalleled teacher of Chumash and other texts. His classes were performances by a Master Teacher, whose ability to weave together Tanach, Gemara, Midrash, halacha and tefilla was astounding. Harry said that he couldn’t believe that this was the same Chumash he had learned in day school. He was so mesmerized by Rabbi Milevsky’s shiurim that he bristled when anyone interrupted to ask a question. “It was like attending the opera or a Broadway show. Would anyone dream of interrupting the performance to ask for clarification from the singers or to repeat a passage? I waited until after the shiur to ask my questions.”

He developed a strong bond with Rabbi Milevsky, visiting the Rav’s house for many Shabbos meals. He even named one of his sons after him, after Rabbi Milevsky passed from this world. Harry often quotes Rashi’s statement about Moshe and Yehoshua, that as long as a student is alive it is as if his Rebbe is still alive, and so Harry feels that his Rebbe is still by his side as he continues to teach his Torah.

After law school, Harry returned to Ohr Somayach for another year, this time living off campus with his wife and their first two children. During that year, Harry began teaching for the first time, inviting his football teammates on Jeff Seidel’s Hebrew University team over to his home for Shabbos meals and to Ohr Somayach to study. He then returned to New York and started a job at a corporate law firm. After three years there, he joined the family practice, which has expanded greatly over the years. He and his wife moved to Passaic, NJ, where they are pillars of the Jewish community. His wife, Amy is the General Studies Principal of the Bais Yaakov of Passaic there.

Apart from his busy and successful law practice, he has a few chavrusos for his daily learning, speaks to Jewish audiences all over the world, and films the popular “Harry’s Video Blog” featured on Ohr Somayach’s website (www.ohr.edu/harry).