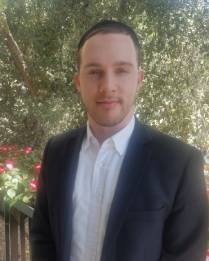 The path to Judaism is different for every ger (convert). We believe that the neshamot of all the Jewish People, present and future, including gerim, stood at Mount Sinai to receive the Torah. But, somehow, thereafter, the neshamot of future gerim were dispersed among the nations of the World. Many gerim have found their way back because their fathers, relatives or ancestors were Jewish and they grew up with a Jewish identity. Others, after extensive reading and study, have become disillusioned with the falsity and contradictions of their own religions and have recognized the truth of the Torah. Others have felt a natural affinity to Jews and Judaism. German converts often have been influenced by the sins of the Nazis and a desire to repent for their nation’s guilt. At least one has sought to reconnect with his neshama through his pursuit of excellence in martial arts. His name is Natan Eliyahu.

Natan grew up in the tiny hamlet of Reichertshofen, Bavaria. His parents do not practice any organized religion, and so he and his older brother grew up without church or religious training. His primary and secondary education was at a liberal Montessori-type school and Natan absorbed the progressive values that were taught there. A precocious child, he gravitated towards science and math, beginning Engineering College at age 16. Although Holocaust education was part of the curriculum at school, with a visit to nearby concentration camps obligatory, Natan, although empathizing with the suffering of the Jewish People, felt neither personally responsible nor guilty for the Germany of previous generations.

When he was 18 he was offered an engineering job with an online marketing firm in Munich, where his brother was employed. The work was interesting and he was good at it. Natan received regular promotions and after two years became a team leader in the company’s search engine optimization unit.

At about the same time as he started work, he began classes at a Ninjutsu martial arts school. Both the owner of the school, Moshe, and one of the school’s principal teachers, happened to be Orthodox Jews with long beards and head coverings.

Martial arts is not just about fighting, it is also training one’s mind to anticipate the unexpected and to become one with the body. While not a religious philosophy, a meditative and philosophical mindset is an element of the Asian martial arts. His teachers had a decidedly different philosophy and “take” on life than Natan had ever heard of. He didn’t realize it at the time, but that different “take” came as a result of learning Torah and keeping mitzvot.

Until he met the teachers at the Ninjutsu dojo, Natan had never knowingly met a Jew. Oddly enough, although he was taught about the Jewish People in school, he had learned that they were an ethnic group, not a religious one. As his respect for his teachers grew, so did his interest in their philosophy.

After about three years of study at the school in Munich, Natan made two important decisions. One was to keep the Sheva Mitzvot Bnei Noach and the second was to spend a Sabbatical year in Asia. Natan had been fascinated by Japanese culture and etiquette and had begun to study the language. He was also planning to live for part of the year in the Philippines. In Japan he studied with the Grand Sensei of Ninjutsu in Japan, Maasaki Hatsumi, and some of his top students. After eight weeks of study with students of Hatsumi, Natan moved to the Philippines where he worked long distance for his company.

While working in the Philippines he would listen online to as many as seven to eight Torah shiurim a day. His neshama had found its nest. He now felt compelled to do more to increase his dveikut (attachment) to Hashem. He moved to Vienna, which was both near his family and has a vibrant Jewish community. Still in touch with one of his teachers from Munich, he told him that he wanted to convert. Natan was directed to Rabbi Michoel Pressburger, a chassidishe rabbi in Vienna, who prepared him for gerut and who made arrangements with the London Beit Din for Natan’s conversion. After a two-year intensive period of study, his conversion was finalized in December 2018. After wrapping up his affairs in Vienna and upon his teachers’ suggestions, he came to Ohr Somayach in Jerusalem in Elul. He is now in Rabbi Selingut’s shiur in the Center Program and reveling in his reconnection with the Torah.