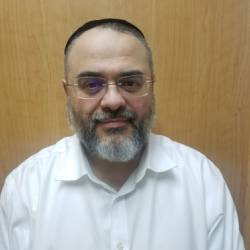 In 1991, with the collapse of the Soviet Union, Yosef and his entire family – his brothers, sister, parents, in-laws and their children — all moved from the Ukraine to Detroit, Michigan. They were a close Jewish family, who, although aware of their Jewish roots (their neighbors in the USSR wouldn’t let them forget), had neither Jewish education nor tradition. They were totally secularized.

Upon arrival in the USA, with virtually no knowledge of English and needing to support his wife and two small children, Yosef took the first job he could find — as a cleaner in a warehouse during the day. In the evenings he worked as a massage therapist. His wife found a job behind the counter of a local bakery. Until they could learn English it was unfeasible for them to find employment matching their educational and professional levels. They both attended The Technological University in St. Petersburg and both had Masters Degrees in Mechanical Engineering.

Among the novelties he saw in his new country and new neighborhood were men in black suits and black hats. When he asked a Russian friend about them, the answer was: “Religious fanatics. Don’t go near those guys.” That piqued Yosef’s curiosity, which led him to drop into a shul in his neighborhood on Shabbos, “just to see what they do there.” As hashgacha would have it, on that visit he met Rabbi Avraham Abba Friedman, a local rabbi who had dedicated his life to advancing Torah education in Detroit, and, when immigrants from the USSR arrived, to kiruv with that community.

Rabbi Friedman brought him home after shul for a wonderful meal and invited him to come to a shiur he gave to Russians on Sunday. After attending the shiur for a few months Rabbi Friedman asked him if he’d like to come with him to New York for a weekend in the Borough Park Jewish community and to attend a bris — his own. The trip to Borough Park was an eye-opener. He bonded with the family he was staying with and enjoyed a “heimish” Shabbos experience. On his return to Detroit, Yosef started going to shul every Shabbos, and, eventually, every day. After a while he and his wife decided to put their two boys in a religious day school in Detroit. After a couple of years the family was fully observant.

In the meantime his brother-in-law had found work in Detroit as an engineer and helped find a job for his sister, Yosef’s wife, as an engineer in the same company. She, in turn, recommended her husband for a job as an engineer in the same concern. Today, Yosef’s wife works for General Motors as a Quality Assurance Engineer. Yosef has also risen in his profession, eventually establishing and running a manufacturing company in Detroit for a wealthy Russian businessman, and, most recently, working as a principal engineer in a large automotive corporation. His two sons are married. They both spent years learning in yeshiva and Kollel in the US and in Israel. One son earned a degree in engineering while in Kollel at Ner Yisroel in Baltimore and is today an engineer in Detroit. His other son, after learning for many years in yeshivot i n Israel and in Lakewood, New Jersey, now works for Beth Medrash Govoha as a fundraiser. Yosef and his wife had a daughter after moving to the States. She is now a student at Beis Yaacov High School in Detroit.

On a Friday a few weeks ago, Yosef left his employment, and on the following Monday landed in Israel to come to Ohr Somayach to learn until Pesach, before he plans to start a new job. He’s in the Center Program. In response to a question about his experience here, Yosef answered: “Excellent! It was worthwhile to leave a job just to come and learn here.” We wish him the best and are confident that with the emunah he expresses and the positive attitude he has he will continue to succeed in both worlds.