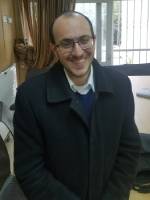 Michael’s mother spent a very eventful year as a nurse at Hadassah Hospital in Jerusalem after graduating from Nursing School in Milwaukee, her hometown. Aside from the practical experience of working as a nurse in a top hospital, she met her future husband – an Israeli soldier. The couple got married and moved to Miami where Michael, the first of five sons, was born. At the age of two, his parents returned to Israel, to the Pisgat Ze’ev neighborhood of Jerusalem. After living in Israel for a few years, the family moved to Milwaukee, where they live today.

Because his mother always spoke to him in English and also taught him how to read and write, he had no difficulty in adjusting to the Milwaukee Jewish Day School — a non-denominational day school. In the eighth grade, Michael switched to a public school, eventually graduating from high school and continuing his studies at the University of Wisconsin in Milwaukee, from which he received an engineering degree in 2017.

Milwaukee is a hotbed of kiruv. When Rabbi Akiva Freilich of the Milwaukee Kollel decided to move out of the frum neighborhood where the Kollel was located, to one of the secular suburbs where Michael’s family lived and start a kiruv shul there, Michael, his brothers and father, were among its first attendees. Michael was 13 at the time. Rabbi Freilich had a major effect on the family.

Throughout his college years, Michael started taking his Yiddishkeit more seriously. He met Rabbi Daniel Meister, the campus rabbi, and started learning with him. His attachment to Rabbis Meister and Freilich continued to grow.

Michael also spent many Shabbatot in the community of Rabbi Michel Twerski, which was a major catalyst for his spiritual growth. Reflecting back on his time in the kehillah, Michael says, “The Twerski community is small and tight-knit, and exemplifies real Ahavat Yisrael — extending invitations to each other’s homes, sharing in simchas, and even something as simple as lending a listening ear. Rabbi Twerski energizes the kehillah with his zeal and piety. I once asked the Rav what the source of his energy is. He answered me very simply: ‘If you were offered to make investments right now that were guaranteed to pay you back in millions, wouldn’t you also be elated?’”

Michael’s enthusiasm prompted him to attend a Summer JLE program at Ohr Somayach Monsey. After graduating, he came to learn at the Center Program where he is today. Of his experience in the Yeshiva, Michael says: “Ohr Somayach is to be commended for changing the face of Klal Yisrael. The care and guidance offered to each and every talmid by the Rebbeim is something very special. Chaza l say that every person is an olom maleh —a complete world. Ohr Somayach aims to make a person aware of the larger-scale ramifications of his decisions, be it for his own progeny, for the Jewish People, or for the world at large. Each of us has the potential to create an entire world. Such a creation needs to be planned with tremendous care. The tools necessary for planning are all in the Torah, and Ohr Somayach gives us the ability to unlock all these tools.”