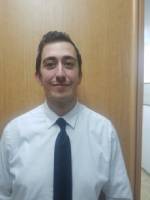 The fact that Adam is here at Ohr Somayach – or even alive at all – is blatant demonstration of hashgacha pratis (Divine Providence). After the Germans captured the Ukraine in 1941, but before they reached their small village, non-Jewish neighbors murdered Adam’s paternal great-grandmother’s family, her parents and one brother in cold blood in front of her eyes. Her two remaining brothers died as soldiers in the Soviet army. Only she, her husband and small son (Adam’s paternal grandfather) survived. They escaped from the Ukraine to Siberia, where they survived the war.

Adam's paternal grandmother was four years old when the Nazis entered her small Ukrainian village. The Jews were sent to a nearby concentration camp called Pitchora. She and her mother were selected for extermination. A large burial pit was dug and the Jews were lined up at the edge, waiting to be machine-gunned to death. Her mother held her hand tightly as the gunner moved down the line. When the woman next to her was hit and fell, her mother hesitated for half a second and then fell into the pit with her daughter — both very much alive. As the bodies fell on top of them, they lay still very quietly, and after nightfall she and her mother climbed out of the pit unnoticed, eventually reaching a farmhouse where a non-Jewish Ukrainian family sheltered her daughter during the remaining three years of the war. With her daughter safely deposited, her mother, amazingly, found another family in a nearby village who was willing shelter her as well. She posed as a Christian servant girl, and would visit her daughter at least once a month, until the war’s end, bringing her packages of food.

Adam’s maternal grandfather, a physicist, also survived the war while fighting in the Soviet Army as an officer. For a country that, according to some estimates, lost nearly half of its fighting men of about 33 million soldiers, that could be considered a nes niglah, an “open miracle”.

Adam’s mother was born in Tambov, a regional capital about 300 miles south of Moscow. She was the only Jew in her grammar school, and an object of anti-Semitism. Her father, who was stayed in the Army after the war and eventually rose to the rank of general, died when she was 14. A very gifted and musical child, she moved at age 15 with her mother to Leningrad (now St. Petersburg) to study piano at one of the best conservatories in Leningrad. She was one of only three Jews in the school. She graduated first in her class. After graduation she began a successful concert career, but longed to leave the Soviet Union and its overwhelming anti-Semitism. She and her mother had their chance in 1979 when a small window of opportunity opened for the Jews to leave. They eventually made their way to Chicago.

Adam’s father survived the Soviet Army, which was extremely anti-Semitic. His nose was broken no less than ten times in anti-Semitic attacks by fellow soldiers. If he didn’t have a “Jewish nose” before he entered the army, he did when he left. He and his family left the Soviet Union as it was breaking apart in the early 1990’s and large scale emigration became possible. They also moved to the greater Chicago area, where his parents met and where Adam was born.

Adam grew up in Wheeling, Illinois, a suburb northwest of Chicago, without much of a Jewish community. His family was secular although his parents retained a warm feeling for, and an identity with, the Jewish People and our G‑d. They celebrated Pesach, Rosh Hashana and Chanuka, and his mother even hosted a rabbi who taught classes on Yiddishkeit to a large group of Russian Jews in their home for a number of years.

Adam was a thinker. Before his bar mitzvah he announced to his father that he had thought things through and decided that there was no . His father told him: “I’m proud that you’re questioning things and going through this journey. You’re half right. There is no , but .” That statement made a big impression on little Adam. He’d have to think again.

Adam inherited his musical ability from his mom. She taught him piano and arranged for him to have lessons in classical guitar. He’s been writing poetry since he was eight years old.

Although to an older generation, like mine, rapping may not sound like music, to a younger generation, it very much is. That is the medium to which Adam has applied his musical and poetic talents. When he was 21 he started to record his rap music. He’s had moderate success. Adam wants to spread a positive message to the world. One of the reasons that he’s here in Yeshiva, he says, is to get “the message.”

According to Adam, has had a hand in his family’s history and in his life from “Day One”. As previously recounted, had saved Adam’s family from annihilation during the Second World War. He brought the family to America. After their marriage his parents had no children. While working at The Ark, a Jewish social services agency in Chicago, his mother happened to mention her disappointment to a fellow staff member, a doctor, who “happened” to be a fertility specialist and an Orthodox Jew. His first piece of professional advice was that his mother should go to the mikveh. Although they were thoroughly secular, his mother listened. She was 38 years old and conceived immediately after her immersion.

And, now, has brought Adam, an up-and-coming rapper, to Yeshiva.

Like the Purim story, Adam sees a series of seemingly random events as talking to him, taking him by the hand and leading him to the Promised Land.

Early this past summer, “out of the blue,” he got a call from a Chabad Rabbi whom he didn’t know, inviting him to perform at the Chabad House in Niles, Illinois. In early August he rapped there. Shortly thereafter he received a “random” email from a kiruv Rabbi in the Chicago area, Doron Lazarus (a former talmid at Ohr Somayach), asking Adam if he’d like to meet with him. Adam agreed and began learning with Rabbi Lazarus for an hour each week. He also spent some Shabbatot with Rabbi Lazarus and his family. After about a month, Rabbi Lazarus sent him a link to the J101 program at Ohr Somayach. After looking at the program, Adam thought that it was the answer to his prayers. “It resonated with me,” said Adam.

How does he like it? “I love it. I took it upon myself to absorb as much as I can. It’s amazing. I see the value in Yiddishkeit. I would like to be a rabbi — a rapping rabbi.”