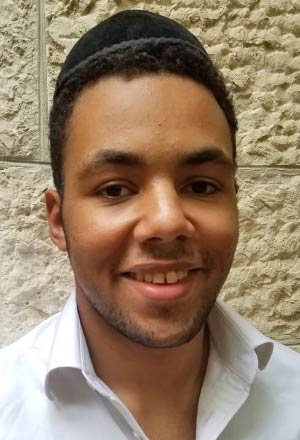 According to the Rambam the belief in the coming of the Mashiach is one of the principles of our faith. We are told that in the end of days there will be a “kibbutz goliot” — Jews from the “lost tribes” will come back to Israel and rejoin their brethren, although they may have been separated for thousands of years and didn’t even know they were members of the Chosen People. In many ways Yeshivat Ohr Somayach is a kibbutz goliot in miniature. Students come from all over the world to learn here. That includes places where one would never expect Jews to live, like the Cameroons, Serbia, Lebanon, Singapore, India, Afghanistan, Uzbekistan, China, South Korea, Japan or even down the road from the Yeshiva — the Arab villages of Yehuda and Samaria. Yehuda Chaim is one of these returnees who didn’t even discover that he was Jewish until he was 10 years old.

Yehuda’s mother is the daughter of a very prominent Chassidic rabbi who was one of the heads of a chassidishe boy’s school in Stamford Hill — the most Orthodox enclave in London. She was one of 14 children. Very curious and explorative as a young teenager, she ventured outside the walls of their virtual ghetto and began to spend time and make friends with non-Jews in the multi-cultural soup which is modern London. Her family was scandalized by her behavior and she ran away from home. Soon afterwards she married a non-Jewish Nigerian man and moved to Plumstead, near Greenwich, a decidedly non-Jewish area of the city. Yehuda was born there, grew up as a Christian and went to a Christian primary school. Yehuda’s mother had virtually no contact with her Jewish family and he had no idea he was Jewish.

When he was ten years old his mother made, what seemed to Yehuda, a radical decision. She revealed to her children that she was a Jewess and, therefore, they were also Jews. She then moved with her four children to Chigwell, near Ilford, a very Jewish area of London, and enrolled her school-age children in the Ilford Jewish Primary School. They were the only multicultural students in the school, and, as such, were objects of much curiosity. For the first few months it was very difficult for Yehuda socially. Fortunately, he was a very friendly and outgoing boy, and after a few weeks was quite popular with the other boys in his class. Since he had no Jewish background at all, he was far behind the rest of the class in Jewish studies. But the school provided tutors and he was soon up to speed. In grade seven he began at the King Solomon School in Ilford. He did quite well there and in his final year was Deputy Head Boy of the school. He then did his A levels and gained admission to the University of Hertfordshire.

King Solomon School is a modern Orthodox school, and Yehuda, while happily Jewish and somewhat mitzvah observant, wasn’t yet fully committed to the life of a religious Jew. A certain crisis brought him to a closer personal relationship to , and his desire to continue growing that relationship brought him to the JLE of London — one of the most prominent kiruv centers in England. He studied Derech Hashem with Rabbi Sandor Milun and attended many other classes. In his gap year, between A levels and University, he did an apprenticeship as an assistant teacher at the Crownfield Infant School, where he taught Jewish Studies to six and seven year olds. The JLE has helped send him to Ohr Somayach in Jerusalem for the past two summers. His experience in the Mechina Program has been very positive. He says: “I have improved tremendously and am very grateful to Ohr Somayach for giving me the opportunity to study here.”

Yehuda Chaim is now going into his second year at university, majoring in Geography and Geopolitics. After his life experiences in overcoming seemingly insurmountable obstacles, he has dedicated himself to helping other teenagers do the same. Last year he started a business giving motivational talks to high school students. It’s called “Motiv8” (their Facebook page is at https://www.facebook.com/Motiveight Project/#). The business is growing quickly. He has contracts with many schools in England and already has 12 staff members. If you meet Yehuda Chaim you’ll understand why he’s so successful. It’s called charisma, or, as we say in Hebrew, “chen”.