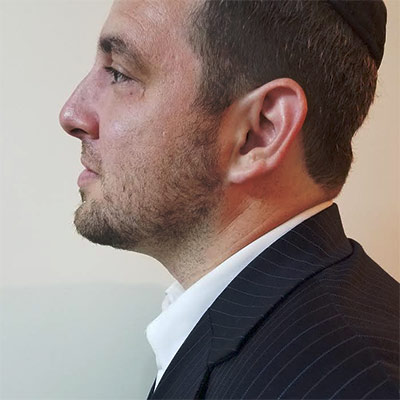 YM Wachs, from Philadelphia, was brought up in a yeshiva family, the oldest of nine children. His father is a Rav and involved with kiruv. After attending various yeshivot in the US, but not quite finding his niche, he sought success in the world of business, and started a number of ventures. In fact, he was a “serial entrepreneur”. Among the businesses he started were: a carpet cleaning and disaster restoration business; a construction firm; a rental real estate business; and eventually he moved into finance. His last venture was a proprietary trading firm and equity trading platform. And all this before he was 26!

Although his formal education was in traditional yeshivot, he was an avid reader, devouring books on philosophy, religion, history, science and anything else he got his hands on. He also writes poetry and has traveled extensively. To date he has visited over 75 countries throughout the globe, and almost all of the states in the USA. Eventually, YM decided to re-engage with yeshiva learning, and chose to come to Ohr Somayach in Jerusalem. He is an exceptional student, and advanced rapidly through the yeshiva. After completing the Beit Midrash shiurim he entered and completed the Ohr LaGolah Program. He has also taught numerous classes and has given “chaburos” (in-depth Talmud seminars)to all levels within the yeshiva.

Earlier this year YM decided to re-enter the world of business and entrepreneurship with the aid of a new tool in his tool-box — an MBA degree. He spoke to a number of schools in Israel, but didn’t quite find what he wanted. Then he heard about a highly-rated one year MBA Program focused on entrepreneurship at the University of Oxford in England and decided to apply. After he submitted his application he received a very enthusiastic response from them, was invited for an interview, and was subsequently unanimously accepted by the admissions committee.

With his colorful background, stellar GRE scores and his Bachelors and Masters of Talmudic Law from Ohr Somayach, YM was also invited to apply to the business schools at MIT, Yale and INSEAD, among others. One of the reasons he chose Oxford was that he found out about an additional program offered through the University, combining the MBA with another Masters degree, focusing on issues of global importance. He decided to explore a Masters degree at the faculty of Theology, reasoning that he could write a thesis exploring Talmudic concepts dealing with issues of economics and religion, thereby keeping his head in learning Torah while in the secular and intellectual environment of Oxford. The application he submitted to the Theology faculty included essays he had written in Hebrew, which he translated into academic English. The subjects were Talmudic discussionsin “basar v'chalav” (meat and milk), and “chakirot” (Torah debates) of the Rambam and Ra’avaddealing with bal tosif and bal tigra (not adding or subtracting from the commandments). The faculty was impressed and extended an offer to him as well. Based on this combination of his interests, the interplay of economics and religion, he was also awarded a full academic scholarship, jointly sponsored by the University of Oxford and the Pershing Square Foundation.

Asked about his many years of experience in Ohr Somayach, YM sums it up: “Along with an eclectic mix of students looking to challenge themselves, what is most resonant to me is the exceptional faculty, each one with his respective derech (method) in learning, and yedias haTorah (Torah knowledge).”

We wish him much success and happiness in all that he does.