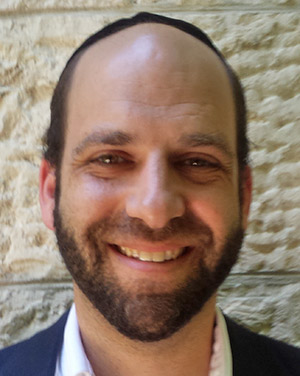 For one growing up as a Reform Jew in the ultra-liberal, secular San Francisco, California of the 80’s and 90’s, adherence to Torah and mitzvot was as foreign as a trip to the planet Neptune. Shalom’s father was the General Manager of the Fairmont Hotel in San Francisco, the most luxurious hotel in the city. The family lacked nothing in material terms. After public primary school, Shalom enrolled in one of the most elite private preparatory high schools in the West. After graduation he was accepted to Stanford University and entered in 1991.

Shalom had intended to become a doctor, and took courses in the Sciences as well as the Humanities. But there was something more that he wanted out of life. “I would ask my professors: What is life all about? I understood that it couldn’t be that life was excelling in a chosen profession, discovering the thing that no one else had, winning a Nobel Prize. But, those were the answers I was given. It occurred to me that the professors had never really thought about why we were put on earth?”

The summer after his freshman year, he went on a trip to Israel to study Hebrew language at Hebrew University in Jerusalem. One particular experience on that trip made a lasting impression. He observed his first full Shabbat. The effects weren’t immediate, but they proved to be profound.

After his second year at Stanford he received an internship at the Clinton White House in Washington, DC. He worked for the Office of Public Liaison doing Public Relations. He loved it. During that summer he also met other young people who were both “frum and cool” — a combination that had never occurred to him as a possibility. It was in DC that he experienced his first Tisha B’Av. “I was told it was a fast day, but I didn't know why. My friend told me to come to Shul after work not wearing leather shoes. I thought he was crazy when I saw him sitting on the floor, until I saw Senator Joe Lieberman on the floor next to him! Then I realized that this couldn't be that crazy!”

His father had been pressing him to decide on his professional life-path, but Shalom couldn’t decide. At this point he felt that he needed to learn more about his heritage. He left Stanford for two years and delved into the study of Judaism in Israel. He spent a year at Pardes and another at Yeshivat HaKibbutz HaDati. Then he returned to Stanford in 1995, graduating the following year.

Shortly before graduation a recruiter for the Center Program at Ohr Somayach, Rabbi Moshe Efros, visited Stanford. The program he described sounded perfect to Shalom — an opportunity to gain the “tools” to be able to learn Torah independently.

Shalom spent two years in the Center Program and was enthralled by the rabbis and their classes. In particular, Rabbis Epstein and Mandel inspired him. He also volunteered for the “job” of bringing breakfast to Rav Bulman, the mashgiach ruchani of Ohr Somayach, and spent hours with him, drinking in his wisdom and haskafa while Rav Bulman ate his breakfast.He continued learning in the Beit Midrash program, and then completed the Ohr LaGolah Program and received semicha. In total, Shalom spent six years at Ohr Somayach. After his initial two years in the Center Program, Shalom married Suri, who was a madricha in her third year at Darchei Binah seminary in Jerusalem.

In 2004, Shalom entered the world of kiruv. He took a job with JAM at UCLA, doing campus outreach there. After three years at UCLA, another Ohr Somayach graduate named Rabbi Zev Kahn, who had just gotten funding for another kiruv rabbi for his Chicago based JET (Jewish Educational Team), asked Shalom to join him as the Outreach Director. Shalom is still the Outreach Director at JET, and is running programs for young professionals. The programs attract between 500-600 people a year. This summer Shalom brought four young professional men to Ohr Somayach in Jerusalem to learn for a few weeks. Three of them changed their return flights and have decided to stay for additional weeks of Torah study.

His family has grown both physically and spiritually in Chicago. Baruch Hashem and bli ayin hara, Shalom and his wife have seven children — six girls and a boy, ranging in ages from 17 to 4.

His opinion of Ohr Somayach: “It takes the best and brightest, and trains them to become ‘bnei Torah’ who can share that message with others. Ohr Somayach is the standard-bearer of what it means to live a Torah life.”

Shalom has found the answer to what life is all about.