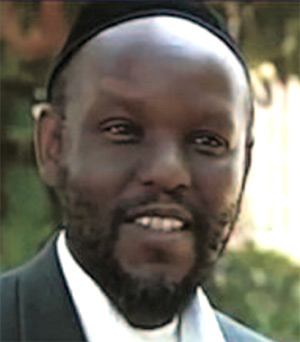 From a scion of the royal family of Swaziland to a Rabbi in Israel. That is the unlikely story of Rabbi Natan Gamedze.

Rabbi Gamedze’s journey of self-discovery began while he was in college in Oxford. He was intrigued when he noticed a fellow student writing from right to left in strange letters. Having learned that the language was Hebrew, Rabbi Gamedze, who always welcomed a new challenge, decided to add Hebrew to the other eleven languages he already knew. He mastered basic Hebrew in a very short time, and was able to move on to Rambam’s Mishneh Torah. He was so enthused by the sefer that he began expounding on it to his Jewish friends, who were secular and mostly ignorant of their own religion.

Apparently his exceptional aptitude for languages had reached the ears of academics in Israel, who offered him a full scholarship to the Hebrew University, which he gratefully accepted. Since Rabbi Gamedze’s family had converted to Christianity, he was well versed in the Five Books of Moses, and so Israeli culture was not totally foreign to him. In fact he felt very much at home in Israel!

As much as Rabbi Gamedze enjoyed his classes in Biblical Hebrew, modern Hebrew and Aramaic, he felt a certain “Higher dimension” was missing. Paradoxically, the very same Jewish friends to whom he had exalted the wisdom of Mishneh Torah years before, and who had since become religiously observant, suggested that Natan try out Ohr Somayach, where they were learning. And it was indeed at Ohr Somayach that he felt in his element. He stayed for five years, thriving under the tutelage of Rabbi Yehuda Samet shlita, and Rabbi Nachman Bulman zatzal. It was in 2000, after a period of study at the prestigious Brisk Yeshiva, that Rabbi Gamedze received semicha (Rabbinical ordination), dazzling the examining Rabbis with his brilliance.

Since then Rabbi Gamedze has settled with his family in the spiritual city of Tzefat, where he continues to teach and give inspiring lectures. He has said that he has the distinct feeling that it was ’s will that he convert and by so doing “give additional glory to the Creator”.