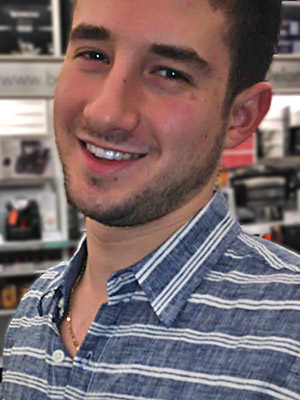 Bravely crossing land, ocean and culture, Alex moved at the age of three from his hometown of Odessa, Ukraine (a major seaport and cultural center on the Black Sea) to the States. His grandfather, who sensed a deteriorating economy and security situation in the Ukraine, and who was also concerned about the dangers awaiting Alex in the notoriously anti-Semitic Ukrainian army, decided to lead the family to their new home in Albany, NY. Growing up in a new culture, and learning English as a second language, was no small feat for young Alex, but he succeeded in overcoming these barriers. He acclimatized to America and did well socially, as well as in his school career. “Growing up, I lived the average secular lifestyle; playing basketball with friends, going to movies and enjoying fishing trips”, he recounts.

Alex has always treasured close family bonds, and tries hard, even when abroad, to stay connected. He fondly describes his brother Nicholas, 14, as “genuine, compassionate and spiritually inclined”. From “Grandfather”, a skilled carpenter and mechanic, he learned the value of hard work and living, along with strong ethics. “He taught me the importance of being true to myself; of living according to what I now describe as the “emes” (truth). This made me who I am, and it’s one of the reasons I’m here today.”

At SUNY Albany, Alex majored in Political Science and minored in Business. He was one of a few thousand Jewish students in the university, but, like most of them, he had little affiliation with Jewish life on campus. “My grandmother made sure we knew we were Jewish. Her own grandparents had been very religious, and she held onto some Jewish traditions, such as lighting candles on Chanukah and hosting a family dinner on Pesach — complete with matzah balls. But overall, my knowledge of Judaism was almost nil, and I have no recollection of coming into contact with religious Jews growing up.”

So how did he end up here in Israel, in Ohr Somayach, studying Talmud and Jewish Ethics at a high level, and discovering how meaningful a true Jewish lifestyle can be? How did he find his way back to the heritage of his ancestors, to the Jewish values they had cherished for so many generations back in the Ukraine?

He shares the roots of his spiritual journey: “I always had in the background these questions about the meaning of life. I used to explore different forms of spirituality, such as Eastern meditation and yoga. I guess I always felt that something bigger was going on, that behind all those events that happened in my life but didn’t seem to make sense, there must be a reason, some kind of ‘guiding hand’. Looking back, I’m here today as a result of those things.” But it wasn’t until his third year of university studies that Alex received his “tap on the shoulder from G‑d”, in the form of a surprise introduction to the campus rabbi, Rabbi Gavriel Horan. “He approached me and asked if I was Jewish. Confused, I told him ‘Yes’, and shortly after that first meeting we began sitting down and discussing major Jewish topics: what it means to be a Jew and about ’s plan in the world. His answers clicked right away with me. It just felt right, and I knew I had found the answers to my deepest questions!”

Over the year Alex began thinking more about , connecting more with fellow Jews and tasted the delight of his rabbi’s Shabbat table. “I really enjoyed the happy atmosphere and lively singing, accompanied by meaningful conversation. I realized that, contrary to modern belief, I didn’t need to get intoxicated to have fun and connect with the people around me. Seeing how a religious family interacts, so respectful and attentive to one another, also made me very curious about Jewish family dynamics.”

Balancing commitment to his college courses, internship at the NY State Assembly and a part-time job, Alex began his journey in his religious education by enrolling in the Maimonides learning program. It wasn’t until the Winter break of 2015 that he joined JLE trip, which was his first visit to Israel. The JLE trip, based at Ohr Somayach in Jerusalem, involved a stimulating mix of interactive study and touring around the country and proved to be a rewarding and pivotal experience. “Suddenly I was together with a group of guys from all over the world, of different ages, all coming from a similar ‘place’ in order to learn more about what it means to be Jewish. After meeting the rabbis leading the trip, my predispositions were shattered. They just didn’t fit the stereotype! They were educated in secular realms, athletic and had also started their successful lives similar to where we had begun ours – on the secular side of the spectrum. In short, they were regular people! I saw that Judaism isn’t something consigned to history. It’s not archaic. In fact, it’s very much alive and livable!” He also recalls deep discussions on life and relationships, which opened up an exciting new perspective for him. “I went home to complete my final semester,” he recounts, “but I already knew I wanted to come back to learn more.”

And come back he did. Since September 2015 Alex has been an enthusiastic and motivated student in the Center Program of Ohr Somayach, a high-level program for college graduates from around the world — Europe, South Africa, and yes, even Albany, NY.

“I feel so fortunate to have this opportunity to study Torah and grow as a person. I’m learning about topics and finding answers to questions that I think puzzle many people out there: about , life and the purpose of Creation. I’ve become a more appreciative person, more comfortable with myself, more caring for others and their feelings. I’m more conscious of how I spend my time. And a lot is due to the wonderful role models I have in the rabbis here who have such knowledge, yet stay real, genuine and grounded. They actually care about me, about my success in life. They want to help me. I never had this kind of relationship with my college professors. I also found here a fantastic group of fellow students, guys who are growing together, enjoying themselves, but with maturity and meaning. We look out for each other. It’s so much deeper than what I was used to!”

“My whole lifestyle after coming to Yeshiva has become more purposeful. My relationships with family, with friends — everything has more meaning. That’s why it’s so important to me to share my story here. All Jews, young and old, should know that you don’t have to be a ‘religious fanatic’ in order to come to Israel and explore your Judaism. I hope my story shows how coming to yeshiva can be a normal and highly rewarding experience!”

We are proud to have Alex in our Ohr Somayach family and we wish him great success in the future.