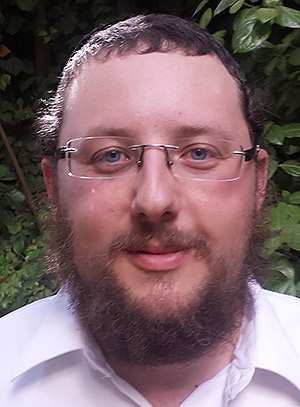 Reuven Chaim grew up in the Orthodox community of Valley Village, a suburb of Los Angeles. His parents are California transplants. His father, Michael Klein, is from Boro Park and studied in Mesivta Torah Vodaath in Brooklyn and is now the head of Quality Control at the Herzog Wine Cellar Winery in Oxnard, California. His mother grew up in Slovakia and worked as a civil engineer after coming to America.

Reuven Chaim attended Emek Hebrew Academy, a modern-Orthodox day school in “The Valley”. By the time he was to enter high school, he had become very serious about learning and enrolled in Yeshiva Gedolah of Los Angeles, a Lakewood-affiliated Yeshiva. He spent three years in its high school, and two years in the Beit Midrash program.

Afterwards, he came to the Mir Yeshiva in Jerusalem as a bachur, and learned there for more than two years before spending a year and a half at Beis Medrash Govoha in Lakewood, New Jersey. In 2011, he married Shira Yael Klein (nee Deifik) — a “Valley” girl — who studied at Chochmas Lev Seminary in Jerusalem and works as an editor/ghostwriter. After their marriage they moved back to Israel, first living in Ramat Eshkol and then settling in Beitar Illit.

Reuven Chaim returned to the Mir Yeshiva, where he is still learning today in the mornings. He has received Smicha (Rabbinical ordination) in Issur v’heter from Rabbi Moshe Sternbuch and Rabbi Yosef Yitzchok Lerner, and in Hilchos Niddah from Rabbi Zalman Nechmiah Goldberg. He also received certification in Even HaEzer from Rabbi Chanoch Sanhedrai (a dayan in Beit Shemesh).

Until now, this story sounds fairly conventional. However, Reuven Chaim is not your “average” avreich. He gives a weekly shiur in Beitar Illit on the Midrash Pirkei d’Rabbi Eliezer (available online) and he is an avid writer. As a teenager he started publishing a blog with his Torah essays, and, for his wedding, he published a sample collection of those essays. He later published a sefer on Mesechet Yevamot called HaMakom MeRachok. He has published many English articles in the “Jewish Bible Quarterly”, an academic journal, as well as publishing Hebrew articles in such rabbinic journals as Kovetz Hamaor and Kovetz Kol HaTorah. In 2014, Mosaica Press published his book in English, entitled Lashon Hakodesh: History, Holiness, & Hebrew. It is now in its second edition. In this work he examines the history of Lashon Hakodesh through Tanach, Midrashim, Gemara and classical commentaries, and its effect on the other languages of the world.

This past Elul, Reuven Chaim started the Ohr Lagolah Hertz Institute program at Ohr Somayach, where he learns every afternoon and evening. He looks toward a bright future as a rabbinic leader of the next generation.