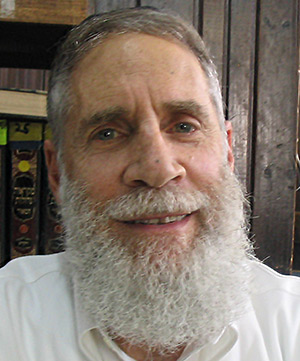 One of the founders of Arachim, rabbi to hundreds of talmidim, and former captain in the IDF Education Corp, Rabbi Laster has been an outreach pioneer sending ripples of inspiration into the Jewish people for over 40 years.

In 1975, the IDF morale was at an all-time low having suffered major casualties and military disgrace in the debacle of the 1973 Yom Kippur war. The IDF Education Corps enlisted Paul Laster, a secular Zionist from Virginia with a background in higher education, to inspire the army’s top officers and revitalize the IDF morale.

Laster found that the top officers in the IDF had “a very tenuous Jewish identity” and “couldn’t define what they were fighting for.” His solution was to instill a strong Jewish identity in the officers, which would in turn inspire their troops.

Under the laws of reserve duty, Laster had the legal right to call in virtually any Israeli scientist, professor, historian, or specialist to teach in his motivational program. Israel’s intellectual elite were at his fingertips, yet none of them succeeded in inspiring his officers. He decided, as a non-observant Jew, that he needed to find the masters of Jewish identity.

When Laster ask the Roshei Yeshiva of Ohr Somayach if they were willing to host a program about Jewish identity, they responded “That’s what we’re here for!” Utilizing this opportunity, Laster built a highly experiential and inspiring ideological program, which became a basic intro to Judaism course. For two and a half years the IDF’s top officers — lieutenants, captains, and majors — were run through the program, including a crash course in Oral Torah, a chavruta with a text, and a hand-picked exemplary family to connect with each officer.

During those years Laster’s program had the highest evaluation rating in the entire IDF Education Corps. Newfound Jewish identity and inspiration were once again flowing through the veins of IDF officers, albeit from an unexpected source. Yet their close encounters with rabbis and yeshivot was ruffling too many feathers to continue. The general of the Education Corps terminated Laster’s program, saying “I didn’t hire you to recruit for Ohr Somayach!”

A few years later Laster’s IDF program was developed into an outreach seminar. This project become part of the largest outreach organization in the world, serving over 100,000 participants every year in their various programs on five continents.

For Laster himself, two and a half years of lectures in the IDF made an impact. In 1978 he moved from the Education Corps to the Beit Midrash study program of Ohr Somayach. Eventually the Roshei Yeshiva enlisted Laster’s educational talents and social connections to create the yeshiva’s first outreach program for Israelis, especially soldiers.

Since 2007, Rabbi Laster combined his outreach experiences and his 20 years of kollel in Yeshivat Chofetz Chaim to do one-on-one outreach in Ohr Somayach. One might call it “outreach through gemara.” No guest speakers, no special fieldtrips, not even standard discussions of hashkafa — through straight gemara alone (plus tremendous care), Rabbi Laster opened the hearts and minds of his students, transforming them into successful b’nei Torah.

Rabbi Laster passed away just before Pesach this year and is survived by his wife and five children.