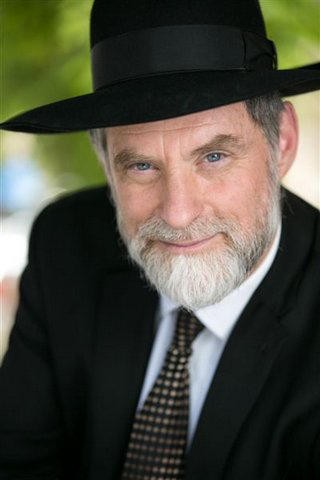 The well known Yiddishe phrase: “Man tracht und G-tt lacht” (Man plans and laughs) is quite applicable to the subject of this profile. In fact, if one can be a bit more anthropomorphic, Hashemmust be having an exceedingly long laugh at Yona Vogel’s expense.

Raised in a non-observant home in West Hempstead, NY, Yona’s plans did not include moving to Israel and becoming a yeshiva student, rabbi, scribe and author of religious texts. He had a typical Long Island Jewish upbringing at the time of his youth — afternoon Hebrew School and then a Bar Mitzvah, which marked the end of his Jewish education. After that his attachment to Jewish tradition was eating matzahon Passover and fasting on Yom Kippur.

In college, Yona majored in Political Science and during his senior year was an exchange student at the University of Alexandria in Egypt. His hope was to become an international lawyer and diplomat, and solve the problems between Israel and the Arabs. After spending six months in Alexandria learning some Arabic and a lot about Arab politics, Yona came to Israel for the summer of 1976 to get an idea about the Israeli side of the equation. He had been accepted into law school and planned to start in the fall of that year. Those were his plans. But, his life soon took a detour. While in Jerusalem he met someone who had been studying at a seminary for ba’alei teshuva and who asked him if he would like to learn more about his religion, living for free as long as he wanted. Having no money, and being of a curious turn of mind, he agreed. She took him to Ohr Somayach where he was met at the door by Rabbi Meir Schuster and was placed in Room 8 of the “Mili” building.

While still in college he had thought about his heritage and decided that he should be “more Jewish”. That meant to him to do whatever he knew to be Jewish. But he didn’t know much. Now that he was in a yeshiva he figured that he should go all the way. That same day that he came to the Yeshiva, he decided to take on all the mitzvot. He still planned go back the States to attend law school at SUNY Buffalo in September. As the summer progressed and he became more engrossed in leaning, he postponed his entry into law school. In February of 1977 he returned to New York and made plans to spend another year in the Yeshiva. He applied for and received a deferment from law school for a year. He came back to Israel before Pesach, and as hashgacha (Divine Providence)would have it, he met an Israeli young lady, who grew up observant in the Bayit Vegan neighborhood of Jerusalem, and after a few dates they decided to get married. After the marriage in January of 1978 Yona decided that it was impractical for him to go to Buffalo with an Israeli wife for at least three years. He decided to stay in Israel. The young couple then moved to the Ohr Somayach branch in Zichron Yaacov. He learned there for eight years. During that time he developed a very close relationship with Rav Mendel Weinbach, one of the founders of Ohr Somayach.

After getting smicha from the Rabbanut of Israel, Yona became a sofer and a magiah (checking STA”M). He also wrote a classic sefer in English on safrut, Mishnas Sofrim. In 1986 the family moved back to Jerusalem. While living in the Har Nof, a largely English-speaking neighborhood, he saw a need for a learning program in English for men who worked. He started Machon Daniel in 1989. He eventually opened a branch in Beit Shemesh and one in Sha’ari Chesed. About 200 men attend shiurim and learn in the Batei Midrashim of the various branches of Machon Daniel. A number of the rebbeim there are Ohr Somayach alumni.

Yona and his wife have had, bli ayin hara, much nachat from their children. The boys are learning full-time. His oldest son recently received “Yadin Yadin” (certification as a rabbinic court judge), another son won first prize at a nationwide Torah competition, another is a published author of sefarim, and he has a daughter who is a well-known designer of modest clothing for women.

Not content to rest on his laurels, Yona is presently writing a new sefer on chinuch. Working in the field of safrut, he is involved in obtaining for clients the highest quality tefillin and Sifrei Torah.

In sum, Rabbi Yona Vogel can look at his life and share the laugh with Hashem.