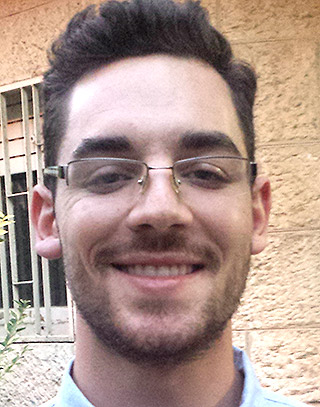 The hottest, most effective and innovative program in outreach today is the JInternship Program. Originated and devised by the Ohr Somayach "Think Tank," it matches up college graduates and graduating seniors together with jobs in their desired careers in Israel. Though this program we have managed to attract young Jewish men with minimal or no Jewish background and with varying degrees of interest in Judaism to our campus. And they are flourishing here.

The program involves a learning schedule and an occasional trip in addition to their internship with Israeli employers. This “work/study” program, the duration of which is usually four to five months, has literally changed the lives of scores of young men and has added a new dimension to their lives — an attachment to the Jewish People.

One of the stars of the program is Adam Zeiff. Adam grew up in Jericho, Long Island, NY in a very secular Jewish home and community. After high school he went to SUNY Buffalo and got a degree in Psychology. While in college he was active in sports, particularly in basketball and track and he was a member of a fraternity - Sigma Alpha Mu. A bundle of energy and enthusiasm, after college, Adam started working in a startup moving business where he did sales and business development. He also worked in software sales.

Despite his success in business, Adam was looking for more meaning in life. On the advice of a rabbi he met in college, Adam came on a Birthright trip in May of 2013. That trip inspired him to keep searching. This past summer he decided to come to the JInternship program at Ohr Somayach. Adam is now working at the Israel office of Finn Partners, one of the top public relations firms in the United States and one of the largest in the world. He works from 9:00 am to 2:00 pm and then learns in the Yeshiva from 3:00 pm to 7:00 pm. He is putting on tefillin, davening and keeping many mitzvot.

Recovering his heritage has had a collateral effect on his family. His mother, who is a dentist with a practice in Manhattan, recently came to Israel on a Jewish women's trip and is now very excited about keeping mitzvot and living a more Jewish life. His two younger siblings are also getting involved in Judaism.

Adam has what the Rosh Yeshiva, Rav Nota Schiller, shlita, calls an incurable disease — “hakarat hatov" — a desire to acknowledge and to repay the good that he received. "The Yeshiva is a wonderful institution. I want to see more students coming here." Towards that end, Adam, together with the other interns, is starting a crowd-funding project to aid the Yeshiva in its goals so that others can benefit as he is. On this past Thursday evening, November 25th, the interns launched this crowd-funding project with a gala barbecue. Adam chaired the event and led a lively discussion of goals and methodology. The intelligence, seriousness and focus of the discussion and the interns’ obvious display of enthusiasm are a fitting tribute to Adam and an almost certain guarantee of success.