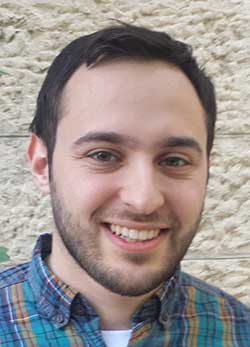 RSS: Yonatan, please tell us about your family and upbringing.

YN: I come from a traditional family — United Synagogue (Orthodox). We were kosher at home and didn’t eat meat out of the house. My primary school was Sinai (a Jewish school) and for secondary school, JFS (Jewish Free School). I have two sisters, one who is single and living at home in Stanmore (a suburb in northwest London) and another who is married and living in Gush Etzion (the Settlement bloc). She became frum before me. Her husband is learning in yeshiva and is hoping to get smicha soon. My younger brother is studying real estate in a college in London.

Cambridge University has become a family tradition. My father, who is a Chartered Surveyor, is a Cambridge graduate. He’s now a manager and developer of real estate in England. My sister who lives in Israel earned a place at Cambridge but came instead to Israel after secondary school to study in seminary and then got married.

RSS: What prompted you to become religious and how did you decide to come to Ohr Somayach?

YN: It was a gradual process. At JFS they had a Shabbat program in conjunction with the Gateshead Yeshiva in the North of England. The first Shabbat I spent there touched me deeply on an emotional and spiritual level. One of the madrichim of the Shabbat trips kept in touch with me and we learned weekly. While in Cambridge I travelled to Washington, DC with a trip organized by a Jewish organization in London. There I met Rabbi Chaim Gross, a Cambridge graduate and a rabbi at Ohr Somayach in Jerusalem. We stayed in touch throughout my years in university. His intellectual level and passion for Torah were inspirational to me, and with his encouragement I applied to and was accepted by Ohr Somayach.

I spent a year abroad in Paris as part of my degree and taught English in a public school attended mostly by Arab immigrants. Being on my own in another country, I felt freer to take on more religious practices than I might have done at home. After the school year finished I studied in Yeshiva in Paris for two months.

RSS: How did your education help you in Yeshiva?

YN: The skills I learned studying languages in university certainly helped me to acquire Gemara skills.

YN: At the beginning it was difficult because I was thrown into the deep end of the sea of Talmud and it was even more intense than my days in Cambridge. I enjoy it very much. Every rabbi is great and has special qualities. The chevra is very similar to me and the learning is challenging. It’s a real inspirational place to be.

RSS: What are your future plans?

YN: I came to Ohr Somayach in Elul and plan to stay until the end of the summer zman. After that I’ll probably go into finance or law in London. I want a job where I have enough time for my family and which will allow me to continuing my Torah learning.