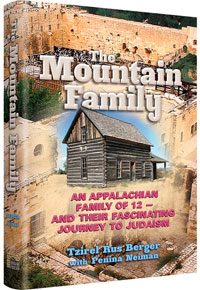 A recently published book by ArtScroll Mesorah called “The Mountain Family”, has touched the hearts of people all over the world. The Mountain Family chronicles the journey of Sheryl Massey and her family, from a small sect of Sabbath-observing Christians living in isolation in the Appalachian Mountains, to well-loved and well-respected members of the Jewish community here in Eretz Yisrael.

Yeshivat Ohr Somayach played a vital role in the lives of the Massey sons. Over the course of ten years all six Massey boys learned within the hallowed halls of Ohr Somayach. Nosson, the second son shares some of his reminiscences.

“It was my first Shavout in Ohr Somayach, and my brother Dovid, a friend and I stayed up all night learning, and then walked to the Kotel in the morning. It was an incredible experience. We felt so connected to G-d, the Jewish People and the Torah.

“Since we were still observing two days of Yom Tov at that time, we wanted to try it again the next night. Rabbi Geffen told us that if we really wanted to learn well, a good night’s sleep was crucial. He stressed that the custom was to stay up the first night only.

“As a ger (convert) I really appreciated the clarity and stability that the guidance of our Rebbeim gave us. Just a few short years earlier I was still living with my family back in the mountains, trying to find our own way to G-d. Now, here in Yerushalayim, it was no longer a mystery what G-d wanted from us. Thanks to His Torah Laws and the Torah scholars who put their hearts and souls into teaching His Word to newcomers like myself, I was finally being offered the direction that I had craved all along.

“During the years that my brothers and I learned in Ohr Somayach we were privileged to spend our days in the presence of some very special Torah personalities. Among them were Rabbi Dov Schwartzman zt’l, Rabbi Bulman zt’l, Rabbi Weinbach zt’l, Rabbi Schiller shlita, Rabbi Isbee shlita, Rabbi Aharon Feldman shlita, and Rabbi Moshe Carlebach shlita. In Ohr Somayach we received a tremendous amount of personal guidance not just in hashkafah and learning but in the day-to-day behavior of a “ben Torah”. This personal guidance touched every area of our lives, an excellent example of which was the tape one of the rabbis made for me in which he recorded Shalom Alecheim, Kiddush and a number of the Shabbat Zemirot so that I would be able to conduct my own Shabbat meals in accordance with age-old customs and tunes.”

“Not only was Ohr Somayach instrumental in molding and guiding my brothers and me into true bnei Torah, but it was a letter written by Rabbi Samet shlita that eventually smoothed the way for my mother’s and younger siblings’ conversions, as she tells in her book:

…I drove up to Baltimore with my youngest daughter in order to speak with Rabbi Mendel Feldman about my conversion. By this time I was beginning to feel desperately uncomfortable with my non-Jewish status. Neither Jew nor gentile, I lived alone in never-never land.

Rabbi Feldman’s shul was reached via a set of curved stone steps. As I waited outside I noticed a gaping hole where one of the stones should have been. When I spotted the forlorn stone, cast off to the side, I immediately identified with that missing piece. I belonged with the Jewish people, just as that stone belonged to the stairs. And yet, after so many years of searching for the truth I was still all alone, to find my way home.

I took the small hand of my four-year-old Debra firmly within my own and entered the old shul. Rabbi Feldman offered us seats across the table from him. I felt his eyes bore through me. “Well?”

He waited for me to begin speaking, but I didn’t know where to start or how to begin. As I desperately thought of what to say, I remembered a letter I’d received from Rabbi Samet of Ohr Somayach. It was in my U-Haul truck. I excused myself to retrieve the letter.

Upon my return I handed Rabbi Feldman the cherished piece of paper.

You have just become the proud mother of the fifth Massey tzaddik! We know that the souls of all the geirim were at Har Sinai, but for one father and mother to be privileged to bring so many of these souls into the world is unusual.

How many tears have Jewish mothers shed throughout the ages to be worthy of sons like your boys. Each one of them is a jewel in his own right.

I have been very close with them since they came. They have found favor in the eyes of many, so that you as a concerned mother don’t have to worry about their spiritual and material welfare.

I am sure that with Hashem’s help they will all find good shidduchim. Nosson once pointed out to me that one of their virtues is that they were never exposed to the impurities of the modern world.

I hope that things will work out for you soon in Baltimore with your conversion, as well as the other children.

May the time soon come that your whole family as well as the entire Jewish people will be together here in Eretz Yisrael with the coming of the Mashiach, speedily in our times.

Rabbi Feldman read the letter through and then looked up a time or two as he paced back and forth. “Did you solicit this letter?”

I continued to state my case.

“Did you hear what I said? I said I would convert you.”

Finally it started to sink in. I hardly heard much of what he continued to say. I was both elated and guarded, as we had thought we were so close a few times before.

All I had to do was move my family to Baltimore and then we would be allowed to convert...