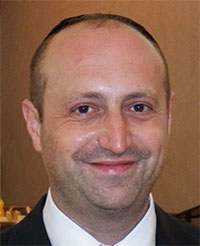 “Suddenly the 50-year old drunk Croatian truck driver said to me, You know, Hitler was not so bad after all…. And I thought, What am I doing with this guy in the middle of nowhere?! No one will hear me screaming!”

Life as an atheist in Berlin, Germany started to get boring and meaningless by age 28, says Michael Selutin. That’s when he decided to leave his job in software to hitchhike, bus, and train his way from Berlin to Jerusalem in search of wise men who could answer life’s questions.

Michael says that in all his travels he never actually met a wise man — but he did encounter some startling and candid anti-Semitism, since no one knew he was Jewish: a drunk Croatian truck driver confessed praise for Hitler, a Turkish man called Israelis inhuman warmongers out to destroy Muslims, and a Jordanian swore the Holocaust was a big hoax.

Finally in Jerusalem, Michael spent a year in yeshiva asking rabbis his long list of questions and soaking up their answers. He then entered Ohr Somayach’s Mechinah program for a year. “Ohr Somayach became my new Torah home where I could learn every day.” Michael and his wife got married last August with Rabbi Wiener as their mesader kedushin (rabbi who officiates the wedding). They both write for a German newspaper and share immense fulfillment at Michael’s continued Torah studies in Mechinah every afternoon.