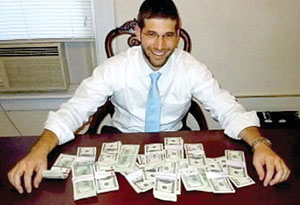 It’s rare that one of our alumni is featured in as many headlines as Noach Muroff has been over the last few weeks. Shortly before last Rosh Hashana, Noach and his wife Esther found $98,000 hidden in a second-hand desk that they had purchased for just $150. They immediately followed their conscience and contacted the original owner, who had hidden her inheritance in the desk and then forgotten where she had concealed it.

This event was initially low-key, but after Rav Shmuel Kamenetsky advised them to make their story public it has been steadily building momentum, and this tremendous “Kiddush Hashem” has become headline news across the world. Speaking at the recent Agudah convention in New Jersey, Noach dismissed the idea that he had done something extraordinary by returning the money. “If we have such a desire for money that it is worth more to us than sanctifying G-d’s name then something is wrong”. Since leaving Ohr Lagolah in 2009 Rabbi Muroff has been teaching in the Yeshiva of New Haven, where he is currently the ninth-grade mesivta rebbi.