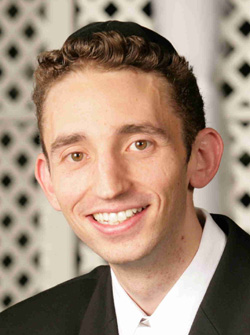 If you ask Eric Weisman why he came to Ohr Somayach, he’ll tell you, “It was the Venezuelan scientist at the Cuban restaurant.” He was working on brokering a biotech deal at a non-kosher restaurant, on Shabbat, when the Venezuelan scientist suddenly turned to him and said to him, “Weisman? Are you Jewish? Look, I’m not Jewish, but you Jews — you stop everything one day a week and don’t go to work!” According to Eric, it’s often the gentiles who show us that we’ve lost our spiritual integrity.

Eric came to Ohr Somayach after graduating with a Master’s degree in Biomedical Engineering on a full-ride scholarship, despite pressure to start work right away. Eric believes that people see spending time in yeshiva as financial doom. “But,” he says “G-d isn’t going to punish you for wanting to learn a bit of Torah.” In fact, testifies Eric, it was an Ohr Somayach rabbi that helped him get the job he now has at one of Israel’s biotech companies.

Every day Eric rides his bike from Ma’alot Dafna to the Har Hachotzvim Tech park. There he and his co-workers handle some of the world’s most dangerous bacteria — antibiotic-resistant “superbugs.” Eric says he is working on fascinating projects. “The world is going crazy with these superbugs and I’m sitting there working on them.”

Equally intriguing to Eric is the impact he has on his secular coworkers. Sometimes he makes a blessing out loud and one of his coworkers jumps to ask how to make a blessing on lunch, or they ask Eric where they can go to pray mincha (afternoon prayers), or if they can borrow his siddur (prayer book).

Eric wakes up every day at 4:30am to learn Torah for 30 minutes before his Torah study partner arrives at 5:45 am, followed by morning prayers. Eric says that the love for Judaism that he got from Ohr Somayach is infectious; his 4-year old son sometimes wakes up at 4:30am and wants to learn Torah with him! If not for his time in yeshiva, says Eric, “How would I know what it’s like to be a Jewish husband and father?”