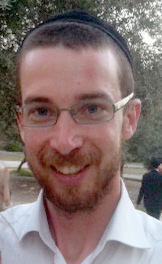 Gil Harris brought two buses of yeshiva guys and seminary girls to make his wedding at the non-religious Kibbutz he grew up on near Eilat. “It was the first time the kibbutz saw such a thing,” he recalls with a smile. The whole Center program came, including the rabbis.

During Gil’s army service he had started keeping kosher and attending Torah classes on his army base. Once he finished his army service, Gil met his future wife, a kibbutz volunteer from America. The inspired couple decided to attend yeshiva and seminary for a year before getting married.

Gil returned to the Center program for a second year as a married man and then opened his first business, a bagel chain in Ramat Beit Shemesh. This one-time manager of his kibbutz’s entire food industry went from an empty space in a building with no plumbing, lights, staff, or business plan, to a fully operational bagel shop in just four months.

More recently, Gil has started his own car rental business (“Choshen Car”) in Ma’alot Dafna. In the evenings he learns Torah in the local synagogue and attends a Shabbat study group that traces the path of Jewish law from the Talmud down to everyday practice. Gil says that the Center rabbis taught him to “serve G-d with who you are, and maintain your uniqueness.”