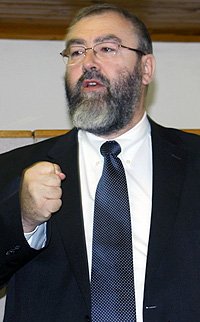 Director of Jerusalem Center for Communication and Advocacy Training

David Olesker is at the center of a global media war against Israel and the Jewish people. From university students to Jewish Federation missions, from the IDF Spokesman’s Office to the pro-Israel Gentile world, David Olesker trains and inspires thousands of people every year in Israel advocacy, all while wearing his Orthodox garb.

In 1982 David made aliyah to Israel while working for the Jewish Agency in Israel advocacy. He took the job on condition that he be allowed time to learn more about Judaism in Ohr Somayach as well. What began as three days a week of learning Torah eventually became full-time learning with side contracting in advocacy. David says, “I got a lot of support from Ohr Somayach for what I was doing. They felt it was good for the Jews.”After he got married he began building the Jerusalem Center for Communication and Advocacy Training.

The JCCAT works with major Jewish organizations on five continents, such as AIPAC and Jewish Federations; the Israeli Ministries of Defense, Police, Tourism, and the Foreign Ministry; and most importantly, says David, student leaders on over 500 campuses in North America.

David says that student leaders act as role models for the rest of the Jewish students. If the leaders make a powerful and successful stand for Israel, the other Jewish students will want to identify with that position, and hence with the Jewish People as a whole. This identity remains for most of their lives afterwards. “I don’t do kiruv,” David remarks. Yet, he concedes that identifying with the Jewish People, who we are and what we are, is a common first step both in Israel advocacy and kiruv.

How has David’s own Torah observance impacted his work? The combination of his sophisticated advocacy training and his hat-and-jacket appearance shatters stereotypes for many secular students. Additionally, David shares that “it is infinitely easier to speak to Gentiles [about advocating for Israel] when you’re a religious Jew. I’m standing up there wearing my ‘tribal dress,’ talking about my people, my history, and my land – they feel that this guy is the real thing.” He also notes that secular Jews are generally not comfortable enough with religion to work with pro-Israel religious Gentiles, placing David in a unique position to bolster Israel advocacy from that sector.