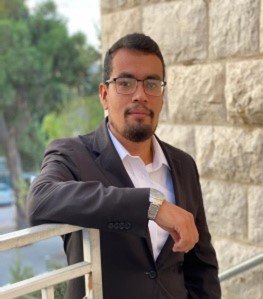 Dovid’s family is very academic. Both of his parents are medical doctors. His older brother, Naftali, is an anesthesiologist. His older sister, Hanna, has a Master’s degree in Political Science and his younger brother, Shmuel Nissim, is a lawyer.

Dovid studied electronics as an undergraduate at the Instituto Tecnológico de Puebla (ITP). He did post-graduate work in an area of wireless communications called “antenna array for energy harvesting.” Another project involved developing and managing the design and modeling of controls for a humanoid robot. And a third project, which he worked on together with his older brother, was the development of a mobile application for calculating trans-operative bleeding, a very important measurement for assessing the amount of blood lost by a patient during an operation.

About 25 years ago, his parents, who were members of an evangelical church in Oaxaca, a city in Southwestern Mexico, found some books about kashrut. They had read in the Bible that certain foods are permitted to be eaten and certain ones are not. But without the Torah sh’ba’al peh, those rules are quite unclear. These books that they had found, however, clearly explained which foods could and could not be eaten.

They asked their church leaders about it. If it said in the Bible that those foods were prohibited, why did they eat them? They did not get any satisfactory answers. On their own, they stopped eating the foods that were listed in those books. They also left their church.

About seven years ago, Dovid’s parents met and became good friends with Victor, an observant member of the Jewish community of Mexico. He was a frequent guest at their house. They had many questions about Judaism and Victor did his best to answer them. As their friendship developed, so did their desire to join the Jewish People. Dovid’s older brother met with Rabbi Dovid Lehrfeld of North Miami Beach, Florida, who supervised his conversion. Dovid was next.

Dovid’s family made contact with Rabbi Zalman Weiss, an Ohr Somayach alumnus living in Jerusalem. Reb Zalman prepared the family for their geirut, which was finalized in Mexico by a visiting Beit Din from New York.

In October of 2020, on the advice of Reb Zalman, Dovid applied to the Yeshiva. In his application he describes his background and goals:

“Even though my parents instilled in me a love for the mitzvoth and Torah from a very young age, I can say that I became attached to Judaism when I started my conversion process (3 years ago). From that moment and until now, I have taken Torah and Halacha classes.

“When I finished my conversion process (a year and a half ago), I fully integrated myself into the activities of the Beth Itzjak Synagogue (in Mexico City), being an active member of the minyan. Already integrated into the community, my family and I were able to see that there was a great difference in leading prayers and participations in classes between the young people who have studied in a Yeshiva and those who have not, and an even greater difference within the young people who have dedicated a year study in Yeshivot in Israel.

“As a family we decided that one of us should go to study in a Yeshiva in Israel (as the first and not the only one). Since I can take time off between the master’s degree and the doctorate, I can take a year to dedicate myself to Torah study. With the above in mind, I asked Rabbi Zalman to recommend some Yeshivot in Israel in which I could study. He immediately told me about Yeshivat Ohr Somayach. After talking with a number of rabbis, I understood that Ohr Somayach is a great Yeshiva, where, in addition to learning Torah, the students learn to study texts like the Talmud for themselves (of course a teacher is always essential).”

Dovid was not disappointed in his choice. He is very impressed with the rebbeim — especially with their caring and their patience. On both his and Reb Zalman’s recommendations, his younger brother, Shmuel Nissim, will soon, willing, join Dovid in the Mechina Program at Ohr Somayach in Jerusalem.