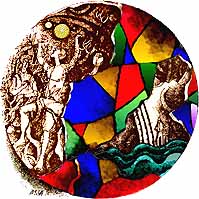 And God He said
lest this man who is singular
Err in his aloneness,
lest he, my new-born creature,
construe his stance to the utter Oneness.

Let it be then, that
he shall know instead,
the delicate edge of divisibility.

Thus came the newer moment
of femininity,
That she with the
clock of her being
could time the beat of his heart and measure
the distance of his soul.

And there was man and his woman.
By day they basked in the gentle rainbow that
rippled with flute-toned notes.
By night they sang with the blue-white hum
of the beam of the moon.
And the notes were scented like flowers.
For light was music and music was light
and all was one.

And God said to man, know then, that the
music and the scent, the rainbow and the light
are yours, but the wall of the world,
it is sacred. And yet it came to pass,
that this measured moment
This fragrant lesson of limits
taught man of hurt.
For as this God-like man
of men
Imagined beyond the temporal
For as this angelic creature
Reached past the spatial,
the hurt, the pain
crescendoed.

And man he ran to the wall of the world
which was glass to see his hurt,
the fragrant hurt that was born of divisibility.

And he saw.
There was him and not him he saw in the wall
of the world, there was then and now, is and not,
and the Serpent of Time twisted round his soul
and strangled his heart.

Nor was he a God who could and could not
was and was not saw man.

And blasphemy swept up from his bowels
filling the crushed valves of his heart
soothing the bursting agony of his soul.
And he ripped the granite tipped tongue of time
from-out of the Serpent's mouth and scratched
at the wall of the world.
For it was sharp the forked tongue of the
Serpent of Time.

God, He could not sin while he could
thought man as he carved with Time's forked tongue
his image on the wall of the world.
For he sought to make the now then
and the would not would with that granite
tipped tongue of time. 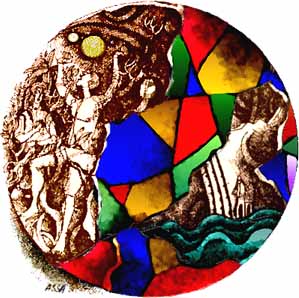 And he chipped at the wall of the world
and it bled light.
Flashing orange and gold with the flying slivers.
Man, the smoothness of his sinews cast
in chromatic shadows now orange now gold
sent his fury into the singing tears of light.
Sparks short-lived and effervescent, sizzled
through the air in parabolic streams of light.
And while the phosphorescence
mushroomed blindingly,
man, he hid his eyes,
from the light,
and his ears,
from the wailing
heat of the song.

A foreboding black gathered deep in the sky,
And God, He sent thunder and ripped the black asunder
with a jagged crash of light.

Begin and build.
End and begin.
And build my wall again.

And man he walked the world
He and his woman
He and his family.
And they cut their feet and scratched their souls
on the jagged pieces of the wall of the world.

Build my wall again God said,
and be thou then as God.
And it echoed through the years in the
ears of the families of man.

They searched for the pieces of the wall
to build God's wall again.
And the fingers of their souls bled as they dug
deep into the earth.

And the blood-red rays of the sun
and the blue white hum of the beam of the moon
were twisted and bent
in the broken pieces in men's hands.
And men they thought they had the light
and drank the crooked colors into their souls.
And the wall of the world it was not built.

And God He said, I will take unto me
a leather-necked people with raw-hide spines
to build my wall again.

And God He picked His people,
and gave them the words.
A leather-necked people with raw-hide spines.

And the words of God they were stiff as steel
and frozen like ice and would not bend.
And a man he had to be with those words
all day and all night to warm those words.

They were stiff and single the words to
the wall of the world and would not fit
one unto the next.

And from out God's leather-necked people
there came men, men with furnaces in their souls.
And within the belly of his soul
such a man he had a womb,
a womb flooded with light,
a light warm as blood and tender as flesh.

And he breathed those words all day and all night
aloud, he warmed those words
by the hovering flames
of the furnace of his soul.

Now he took those words into the belly of his soul,
into that womb flooded with light,
light warm as blood and tender as flesh.
Now it was that the warmed words
of the wall of the world
began to fit, one unto the next.

And in the eyes of his heart he saw the design,
the design of the wall of the world.

And they ran.
From land to land they ran,
God's leather-necked people with rawhide spines.