Exploring the meaning of stealing the Afikoman

There is a beautiful custom that takes place every Passover at the Seder. After kiddush, the father breaks the middle matzah of the three matzahs placed before him and hides it away till the end of the Seder. It is the afikomen, the final food eaten at the Seder. Afikomen is apparently related to the Greek word for "dessert," and it's a real pleasure to watch the happy contented faces of the Seder participants munching away at still another piece of matzah. Some people observe it's even tastier this year then usual. They are eating the cardboard box.

But as all the youngsters know, before you can reach that exciting conclusion to the Seder, you first have to get the afikomen. The children, as you know, are encouraged to steal the afikomen and hold it hostage, refusing to return it until you promise to buy them the gift of their dreams. 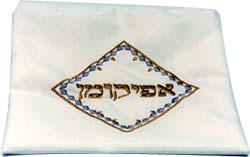 Now, far be it from me to be the grinch that stole Passover, but does it make sense to encourage our children to steal, blackmail and extort money from us? Granted, once they get married they'll be doing it on a regular basis, but do we need to instill it in them as a value at a religious ceremony?

There are those who suggest it's just a harmless game designed to maintain the children's interest in the Seder so they don't drift off. In that case, there should be something there for the average adult as well. But as far as the children are concerned, why not do what we always do? Tell them if they sit quietly they'll get a prize. Offer them a chance to answer questions about what we read.

But thievery and extortion? Isn't that taking educational aids a little too far? Although perhaps seeing what's going on in the American school system, this might be a good way to prepare them. But I digress.

The truth is, I think there's a tremendous lesson to learn from the custom of stealing the afikomen. Let's take a quick look at the Seder. The kiddush is followed by a series of unusual activities. We dip a vegetable in salt water, we uncover the matzos, we re-cover the matzos, we remove the Seder plate, we refill the wine cups. Busy as beavers, we are. Finally we get down to business and one of the children recites "Ma Nishtana - the Four Questions." When the child finishes, he is returned to his seat at the table where, between plotting his afikomen caper, he throws things at his brother and annoys his sister.

Did anyone notice that while we were careful to make sure the child asks the four questions, no one seems to care if he gets any answers?

If you return to the original source of the customs that precede the reading of "Ma Nishtana," you find that they all have the same theme: To inspire the children to ask. The child sees the wine cup being refilled, and he thinks: "Hey! We don't make kiddush twice!" He sees the Seder plate being removed and thinks: "Is the Seder over already?" This inspires a child's curiosity until he wants to say: "Hey guys, why is this night different from all other nights?" 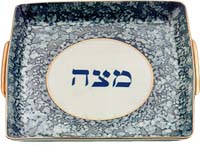 Unfortunately what happens most of the time is that we cover the matzahs, uncover the matzahs, remove the seder plate, fill the cups, and when the child's curiosity is stimulated he can count on receiving the same answer: "How in the world do I know why we're doing all these things? That's how your grandfather did it!"

A friend of mine once offered a case of beer to whoever gave the best answer to the following question: "Why?" Of course, most people gave answers like "because" or "why not?" But the case of beer went to the person with the best answer: "Because that's how they did it in Europe."

It's sad that people can have a Passover Seder every year and never stop to think of all the "whys."

How do we make this night special from all other nights? Parents have a commandment one night a year to tell their children what's really important to them - why we are Jews, the traditions and beliefs of our ancestors, the meaning and miracle of Jewish survival. And the kids have a commandment to listen. Imagine! One night a year the kids have a mitzvah to ask us questions and actually have to listen to our answers. What an opportunity! But do we take advantage of it? Or do we give our children the same tired Seder performance that we did last year?

With all the preparations for Passover, all the cleaning and shopping and cooking - shouldn't we spend some time preparing our Seder? Thinking about what I want to tell my children. Maybe we should buy some of the excellent classical commentaries on the Haggadah, most of which are now available in English, and study them. See if there is a fresh approach to the Seder that we want to share with our children. Something that will be meaningful and relevant as our children enter the twenty-first century. (Maybe the Y2K Haggadah?)

That, I believe, is the reason for the custom of stealing the afikomen. Our children just asked four questions; they deserve answers. Maybe they realize the only way they can get our attention is by stealing it. Maybe the wise men who instituted the custom wanted to remind us that we aren't going to finish the Seder without the children. "Mom, Dad, remember me? I want some answers. And if I have to blackmail you to remember that you have a kid, I'm prepared to do it."

We all struggle to make the Passover Seder meaningful for our guests and for ourselves. But be careful to remember that the next generation is sitting at your Seder table.

Have A Happy and a Kosher Passover.