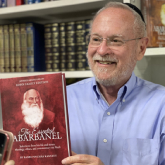 I came to Ohr Somayach in 1986. At that time the Yeshiva was fourteen years old. As I got to know the staff members, I was amazed at the longevity of their tenures and also at the number of former students who had become staff. This spoke volumes about the institution. I had come from the US where about 25% of the working population was changing jobs every year. Job security and loyalty to one’s employer were more or less non-existent. After 35 years at our Jerusalem campus, I think I’ve discovered Ohr Somayach’s secret recipe for success — it’s the mutual loyalty and love that students and staff have for each other. The result is “The Ohr Somayach Family”. You don’t divorce your family members and you don’t abandon them. That’s why today many of our staff members have been with us for their entire working lives.

Pinchas Kasnett is one of them. Pinchas was born a few years after WWII in Washington, D.C., his father’s hometown. When his father was offered a better job, the family moved to Pittsburgh. Pinchas was one year old. The family was, like most Jewish families at that time, not observant, but it had a strong Jewish identity. When Pinchas reached school age, his parents enrolled him in a conservative Hebrew afternoon school. When he was 10, his father changed jobs again and they moved back to Washington.

In Washington, because of the fortuitous involvement of his paternal grandfather in an Orthodox shul, Beis Shalom, the grandfather’s whole family was given life membership. They were regular attendees for the High Holidays. Pinchas and his three first cousins had private Hebrew lessons on Sundays before his bar mitzvah. The only thing he remembers learning was how to read Hebrew and how to daven.

His main connection to Judaism after bar mitzvah and during his high school years in Silver Spring, Maryland was through his Jewish friends and his attendance at Rosh Hashanah and Yom Kippur services. Pinchas was not otherwise interested in the religion.

He attended Wesleyan University, an elite institution in Connecticut, where, he estimates, about a third of the student population was Jewish, but there were no Jewish activities on campus. Not that he would have been interested in attending even if there were.

After a year-and-a-half at Wesleyan, he felt the need for a change in atmosphere. He chose to go West, to Pomona College in Pomona, California. There he found people who were just as smart and academic, but much more down-to-earth. In his junior year he had an American dream girl for a girlfriend: blonde hair, blue eyes, very pretty and not Jewish. Since travel between LA and Washington was expensive, he decided to spend his winter vacation at the school. His girlfriend invited him to Seattle to stay with her family for a traditional Xmas holiday. There was no reason for him not to go. It was one of the best decisions he made in his life.

On Xmas eve, the scene was evocative of Woody Allen’s “Anne Hall.” The large dining room table was laden with all the traditional Xmas foods — none of them remotely kosher. And as they sat around the Xmas tree singing Xmas carols, Pinchas recalls, “For the first time in my life I felt a wave of existential nausea. I was a traitor to my and to my people. I just wanted to get out of there.”

During the first semester of his last year of college, he was an exchange student in a small town in France. He lived with a quite assimilated Jewish family, but the shul in town was Orthodox and he saw his first sukkah in the shul’s courtyard. His neshama was awakening. At the end of the semester, his parents sent him money for a ticket to Israel, where his first cousin Nesanel lived. He spent Xmas eve in Bethlehem and visited a small Arab town where his cousin had some Arab friends.

Back in Pomona for his last semester, he went to a lecture by Alan Watts, a famous British lecturer on Zen Buddhism. Before launching into his speech about the subject, he asked the audience:

“Are there any Catholics here?” A goodly number of students raised their hands. Then he proceeded to ask them questions about Catholic theology. No one knew the answers.

“Are there any Protestants here?” A larger number of students raised their hands.

“How about Presbyterians? Congregationalists? Episcopalians? He asked them similar questions about their respective theologies and the differences between each sect. No one knew the answers.

Lastly, he asked: “Are there any Jews in the audience?”
Pinchas and a few others raised their hands. None among them could answer any of the questions that Watts posed. He then told them that before they learn about Zen Buddhism, they should first learn about their own religion. That made a deep impression on Pinchas.

In the early 1970s, his cousins Nesanel and Binyamin Kasnett started learning Torah with Rav Noach Weinberg in Yerushalayim. Binyamin returned to the States and entered Shaar Yashuv Yeshiva in Far Rockaway, and Nesanel went to Borough Park, where he studied in yeshiva, went to law school and married his religious second cousin. He also began learning with Pinchas. Upon his recommendation, Pinchas read Herman Wouk’s “This is my ”. The book was pivotal in changing the direction of Pinchas’ life. He decided that he wanted to go to Israel and join a religious kibbutz.

In June of 1972, Pinchas was ready to move to Israel. He applied to a kibbutz and they invited him to become a volunteer. Binyamin was now studying in Yeshivat Ohr Somayach, located somewhere on Shmuel Hanavi Street in Jerusalem.

Pinchas made arrangements with his cousin to meet him at the airport and take him to his destination. Pinchas arrived on Thursday the 17th of Tammuz, but his cousin was not at the airport. This was B.C. (before cell phones). Pinchas made his way to Yerushalayim from the airport to find Binyamin. He trudged down a hot Shmuel Hanavi Street, with his heavy backpack, looking for him. When he asked in Dushinsky’s Yeshiva where he might find an American baal teshuva, one of the yeshiva students there walked with him across the street to the Navardok Yeshiva, where the fledgling program of Ohr Somayach was then housed. It was there that he found his cousin. Binyamin claimed that he had mixed up the date of the arrival, and was very sorry. But, since he was there, and it was Thursday afternoon: Why not stay for Shabbos, and on Sunday he would drive him up to the kibbutz? Pinchas agreed. And, suggested his cousin, since Pinchas was staying in the yeshiva, it wouldn’t hurt to hear a shiur. And for Shabbos they would go to Reb Noach’s home for the Friday night meal.

That shiur, on the Prophets, was nothing like he had ever heard in his life. Rav Nachman Kahana was more animated and excited about the topic than any professor he had heard in college. And the excitement was contagious. Pinchas wanted to hear more.

One Friday night, Reb Noach asked: “I hear you are planning to go to a kibbutz. You will probably be picking oranges and grapefruits, right?”

“Yes, I suppose so,” answered Pinchas.

“If I could get a monkey to pick the oranges, would you stay and learn here in the Yeshiva?”

Pinchas heard the logic and stayed.

Rav Mendel Weinbach, zatzal, taught Gemara in the afternoons at the Yeshiva. Pinchas instantly bonded with him and his family. He saw both Rav Mendel and his wife as role models for parents of a Jewish family and was a frequent guest at their home.

By 1973 he had made a commitment to be shomer Shabbos and shomer mitzvahs and was committed to Ohr Somayach. He had also begun to do some work for the Yeshiva, including designing a new application form. After Pesach of that year he was learning in Rabbi Aharon Feldman’s shiur.

In 1980, after years of living in the hinterlands, the family decided to relocate to Yerushalayim, where Pinchas became the dorm manager for the Yeshiva.

As the family grew and the pressure to support them increased, Pinchas began a job search in the States. He was offered jobs as a rebbe in day schools in Cleveland and Baltimore, but, upon the advice of Rav Aharon Feldman, he stayed in Israel and received smicha (rabbinical ordination).The Yeshiva then offered him a position teaching in the Beginners’ Program (today called “Mechina”).

In 1983, the JLE Program needed a director in the New York office, and Pinchas answered the call, moving his family to Monsey. The job included travel to campuses across the country, recruitment of JLE participants and follow-up of attendees. Pinchas was very successful. At the same time, he saw the need to educate not just college-age students, but older singles and families as well. Ohr Somayach had recently begun running a weekend retreat on national holidays at a resort in the Catskills, and Pinchas extended the program to include Rosh Hashanah and Yom Kippur. He instituted services for beginners, and, along with other rabbis, he taught the fundamentals of Judaism to an ever-increasing number of attendees.

Eventually, he turned over the JLE directorship to a fellow Cohen and Wesleyan alumnus, Rabbi Zalman Corlin, and Pinchas accepted the new and challenging position of teaching Torah to businessmen and professionals in the New York area, and fundraising from them.

In 2010, he contacted Rabbi Moshe Newman, the editor for Ohr Somayach’s weekly Torah publication — Ohrnet Magazine — and asked if the Yeshiva would be interested in publishing a weekly column reflecting Abarbanel's commentary on the Chumash. The answer was positive, and that began a new chapter in Pinchas’ life — that of an author. Since then, he has published “Abarbanel on the Torah'' (Menucha Publishers 2017) and “The Essential Abarbanel” (Menucha Publishers 2021). He and his wife moved to Israel in the summer of 2019 and are living in Ramat Beit Shemesh.

May his contributions to the Yeshiva continue, iy’H, for many more years to come.